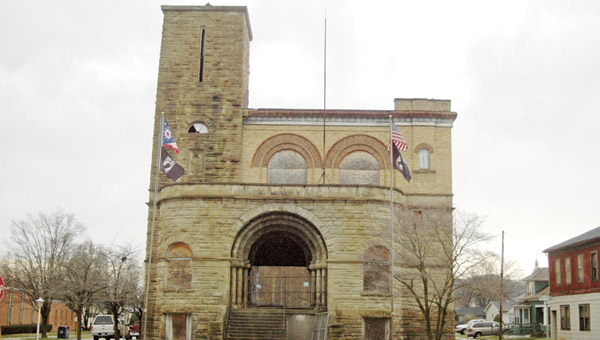 A local architect who believes Memorial Hall can be saved and renovated told the Ironton City Council this week he has applied to have the building placed on the National Historical Register.

Shawn Walker, of Shawn Walker and Associates of Ashland, Ky., said an official historical designation could draw state and federal grant, which could help pay for the project. The Lawrence County Commission has expressed interest in perhaps acquiring the old building from the city for use as office space for emergency medical services and other county government entities.

Walker, who attended Monday’s special city council meeting, said he has spoken with the Ohio Historical Society and officials there have indicated they are interested in the project. Walker said application for the historic designation does not require the signature of an owner, which allowed him to sign the application. The building is owned by the city.

Walker described the building as both “terrible and good.” While it has been significantly damaged by time, neglect and the elements, the four outer walls are still standing and are solid, he said.

“This works to our favor. We can clean it up and rebuild from the inside,” Walker said. “The interior didn’t have a lot of historical significance. It was destroyed by fire in 1905.”

Council member Bob Cleary asked if such a designation would eliminate the option of demolition if, in the future, renovation became cost prohibitive.

Walker said the designation itself did not preclude demolition; funding did.

“If it’s on the registry it can be demolished until you take their money,” Walker explained.

Dickens said the IPA is willing to allocate $1,000 toward the roughly $5,000 needed for Mi-De-Con to bring in a structural engineer who will thoroughly inspect the building. Dickens said the county commission will provide the rest of the money.

The debate over the fate of the building began several years ago. In 2009 a local American Legion chapter had expressed interest in the building but was not able to get funding to renovate it.