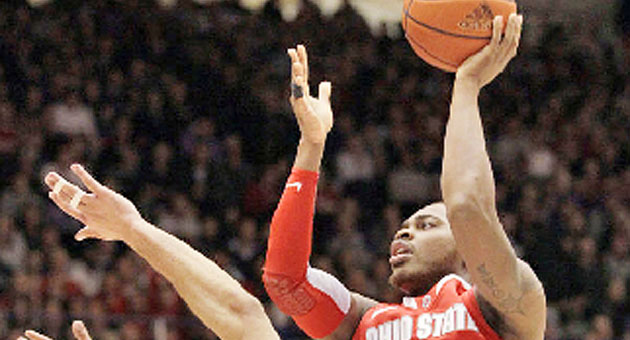 Ohio State Buckeyes’ DeShaun Thomas (1) goes up against Northwestern Drew Crawford to score during a 75-73 win on Wednesday in a game at Evanston, Ill. (The Ironton Tribune / Courtesy of The Ohio State University Sports Information)

EVANSTON, Ill. — Jared Sullinger knew the pass was coming to him. And why not after he had powered and muscled his way through Northwestern defenders all game?

Teammate Aaron Craft delivered the ball right where Sullinger wanted it. He turned and banked in the game-winner with 3.1 seconds left Wednesday night as No. 10 Ohio State recovered after squandering a 13-point lead to beat Northwestern 75-73.

“Craft threw a perfect pass to me and led me right to the angle of the backboard. He let me turn over my left shoulder and finish with my right hook. The bread and butter,” said Sullinger, who had 22 points and 18 rebounds.

“Craft told me he was going to throw it to me. No ifs, ands or buts about it, he said. He threw it to me and I made the shot.”

Northwestern’s Alex Marcotullio tied the game on a 3-pointer with 7.7 seconds to go as the Wildcats went on a late 8-0 run.

But after a timeout, Craft did as promised and got the ball to Sullinger.

“It was just get the ball to Jared and let him make a play. That’s how we drew it up and I’m glad we were able to execute,” Craft said.

After Sullinger’s basket, Northwestern’s John Shurna came down court and threw up a long desperation shot that hit the rim at the buzzer.

“Disappointment. Kind of a tough way to go out,” said Shurna, the leading scorer in Northwestern history who finished with 22 points in his regular-season home finale at Welsh-Ryan Arena.

Shurna’s shot that could have won the game looked on target but as Northwestern has found out most of this season in its quest for a first-ever NCAA tournament bid, close isn’t good enough.

“Thought it had a chance,” Shurna said. “Put it up there and hope for the best. … That’s all you can do.”

Ohio State (24-6, 12-5), which had lost three of five, still has a chance to tie for the Big Ten title if it can win at No. 5 Michigan State in Sunday’s regular season finale. The Spartans already have at least a share of the championship, despite losing to Indiana on Tuesday night.

Deshaun Thomas added 19 points and 10 rebounds and Craft scored 14 points with four 3-pointers for the Buckeyes, who outrebounded Northwestern 44-18, including 20-6 on the offensive boards.

“They killed us on the second shot,” Northwestern coach Bill Carmody said.

“My games flows with it. I haven’t been rebounding as well as I did last year,” Sullinger said, somewhat amazed at the discrepancy on the boards.

“We kind of played off the mismatches. Never been a part of something like that,” he added. “We were determined.”

Ohio State had beaten the Wildcats 87-54 in the league opener in late December, but this one was certainly more competitive — just not on the boards.

The Buckeyes led 73-65 with about 3 minutes left before Northwestern rallied as Dave Sobolweski hit a 3-pointer and Reggie Cobb made two free throws. Cobb later came up with a steal and called a timeout, setting up Marcotullio’s game-tying 3-pointer.

The Buckeyes hit their first six field goal attempts and dominated the rebounding 22-5 in the first half with Sullinger and Thomas controlling the inside.

Sullinger had 13 points and eight rebounds and Thomas had 12 points and five rebounds as Ohio State shot 59 percent from the field. The Wildcats, who play three guards and two forwards, had no one to match up with the Buckeyes’ inside duo.