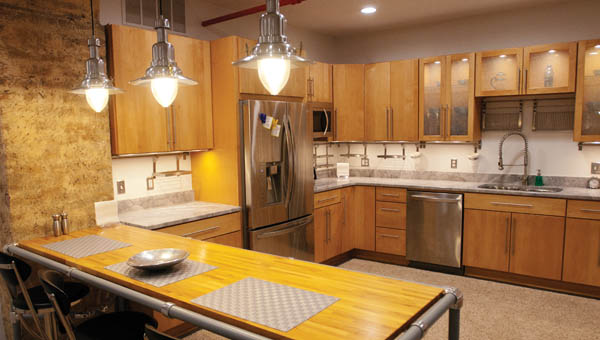 PORTSMOUTH, Ohio — Stepping into the conference room at The Lofts makes visitors feel as if they have stepped into a cosmopolitan flat in the big city. The sleek lines, symmetry, Brazilian cherry wood floors and covers of the “New Yorker” magazine lining the walls feels as if an Armani clad CEO should step through the door, iPad in tow.

In reality, the location is a far cry from the likes of Los Angeles or New York City. The complex is located in Portsmouth — a mid-size town of 20,226 according to the 2010 census.

And that, says owner Terry Ockerman, is part of the draw.

“People like the convenience of a small city; they just don’t want to feel like they live in a small city,” he explained.

The halls are a dual-tone color scheme: white walls with gray accents on the staircase and door frames. Inspirational quotes stand by the staircase and line the walls of the conference room. One reads: “The arrogance of success is on the threshold of disaster.” Ockerman said he heard that from a friend and doesn’t know the original author.

The owner described the design in three words: “clean, simple and functional.”

The Lofts currently features 11 units. Layouts include studios, two bedrooms and three bedrooms. Long leather black couches in the living room welcome the visitor to casual luxury. Some of the units feature an enclosed balcony with brick walls overlooking the city streets below. Studios start at $1,000 a month while a 2-bedroom is $1,500 a month.

“It averages out to about one dollar a square foot,” Ockerman said.

Ockerman bought the building five years ago. The building started out in 1910 as an old furniture store. He and a team of workers remodeled the infrastructure of the building for a year before acquiring their first tenant.

“We used 30 dumpsters to clean out the building,” he said.

Ockerman spent 15 years in the shoe business and traveled worldwide during that tenure. He spent some time studying in northern Italy and went to trade shows in New York and Chicago. During that time he collected ideas that merged into what The is Lofts’ makeup.

When opening The Lofts’, Ockerman thought the place would attract young professionals, management and doctors. However, there was one market he missed — empty nesters. The kids are grown or in college and parents are looking for something smaller with no lawn or maintenance. Now, he has several tenants from that market.

Ockerman also pointed to the housing market as a factor in the popularity in renting places like his.

“Thirty years ago, a young person coming out of college was told to buy a house first thing,” he said. “Now it isn’t as practical to sign a 30-year mortgage. It’s a long-term investment and people move around a lot more now.”