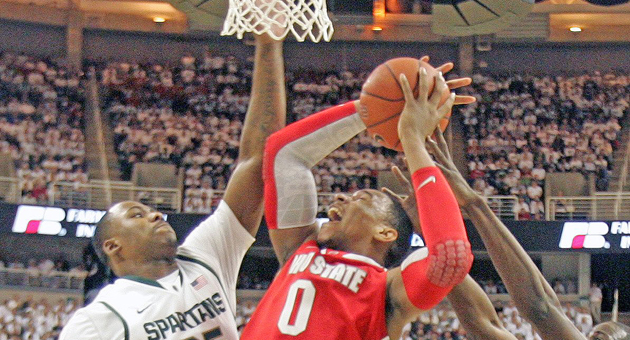 William Buford made a high-arcing jumper from the top of the key with 1 second left, lifting the 10th-ranked Buckeyes to a 72-70 win over the fifth-ranked Spartans on Sunday to forge a three-way tie for the Big Ten championship.

“I was fortunate to knock down the big shot of the night to give us another Big Ten title,” Buford said.

Draymond Green had a chance to put the Spartans ahead in his final home game with 32 seconds left, but missed a long fadeaway from the right wing. Just before the buzzer, Green had a heave that missed the mark.

Buford’s game-winning shot made a once-raucous arena nearly silent and gave a group of people elsewhere in the state a reason to shout with joy.

The Buckeyes (25-6, 13-5) earned a share of their third straight conference championship — and fifth in seven years. They also forced the Spartans (24-7, 13-5) to settle for just a piece of it and ended a quarter-century drought for No. 13 Michigan.

The Wolverines, who won their first Big Ten title since 1986, watched their rivals play from the school’s basketball facility in Ann Arbor after winning at Penn State earlier in the day.

“It was silent the whole time (Buford’s shot) was in the air,” said Michigan guard Trey Burke, who is from Columbus, Ohio. “Once it went in, everybody just flooded the hallway, jumping up and down.”

Michigan State will be the top-seeded team in the Big Ten tournament, which begins Thursday in Indianapolis. Michigan will be No. 2 and Ohio State No. 3.

Michigan State jumped out to a 15-point lead over Ohio State in the first half, but let the advantage slip away just as it did with a two-game lead in the Big Ten race with two games left in the regular season.

The Buckeyes seized an opportunity created when the Spartans had a seven-game winning streak snapped Tuesday night at Indiana.

“Luckily enough the Big Ten’s one of the toughest conferences in the country and it gave us a chance to get a hat and get a shirt,” Jared Sullinger said.

Buford scored just four points when Michigan State ended Ohio State’s 39-game home winning streak last month. He returned the favor with his game-winning shot and by scoring 19 of his 25 points in the second half, handing the Spartans their first loss at home this season.

“I just came in with a different mindset,” Buford said. “During that last play, I wasn’t going to miss.”

Sullinger had 14 points on 5-of-17 shooting and Deshaun Thomas scored nine of his 12 points in the second half for the Buckeyes, who rallied to beat a motivated team that desperately wanted to win an outright championship after starting the season unranked.

Green seemed too fired up about playing in his last home game, shooting a long airball on his first attempt from the baseline and finishing 6 of 18 from the field with 19 points, 12 rebounds and a game-high four turnovers.

Brandon Wood scored 15 points and Derrick Nix had 11 off the bench, while Keith Appling was held to two of his 11 points after halftime for the Spartans, who lost standout freshman Branden Dawson in the first half with an injured left knee.

Dawson has a torn ACL and will miss the rest of the season.

Even with Michigan State’s students on spring break, there was big-game buzz in the Breslin Center and the fans had plenty to stand and cheer about when the Spartans went on a 12-0 run to take a 19-7 lead.

Michigan State led 24-9 midway through the first half, then had a setback that will hurt heading into the Big Ten tournament this week and the NCAA tournament the following week.

Dawson injured his left knee with 10:16 left in the first half. The 6-foot-6, 220-pound forward, who ranks third on the team in scoring, second in rebounds and perhaps first in athletic ability, rubbed his left knee while his leg was propped up on a chair and later walked gingerly to the locker room.

After the game, Michigan State said Dawson has a torn ACL and will miss the rest of the season.

Sullinger missed his first five shots and was 2 of 10 in the first half, but stayed active and aggressive enough to make all four of his free throws and to score eight points to help Ohio State trail by just nine at halftime.

The Buckeyes scored the first six points of the second half and went ahead 52-51 with 9:53 left to take their first lead since scoring the game’s first two points.

For the rest of the game, each team took a turn with a small lead, exchanging shots and banging bodies in a test that should prepare both for the rest of the month. In the second half, there were nine lead changes and seven ties.

“This is about as high a level game as you can see,” Matta said. “I’m happy we were on this side of it.”

Michigan State’s team posed for pictures — without smiling — in front of a Big Ten championship banner during a postgame ceremony to honor its seniors. When it was Izzo’s turn to address the crowd, he vowed that the Spartans would bounce back at the Big Ten tournament.

“We’re going to go win our championship back,” he said.