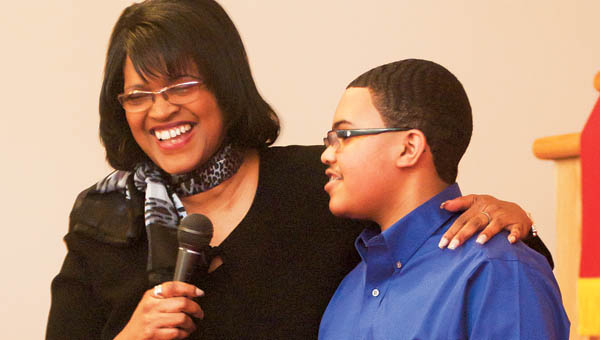 Pastor Robin Davis, left, stands up front at the First Baptist Church of Burlington, with her son Timothy Charles Davis, 16, as they tell of his health troubles from asthma to diabetes during “Not Too Young: Sickness in our Youth” sponsored by The Cause, Inc., Saturday afternoon.

BURLINGTON — Timothy Davis’ troubles began as a baby: When he was 10 months old, he was diagnosed with asthma. It would be a malady he struggles with to this day.

He remembered those early years when the disease was still a new occurrence and he so very young.

“I couldn’t lay flat, I had to be propped up (in bed) or I would go into an asthma attack,” Timothy Davis recalled.

His mom, Robin, recalled when Tim was only 3, he stopped breathing in his father’s arms. He wound up on a hospital ventilator for a few days.

When he was 5 he was diagnosed with juvenile diabetes and thus began a whole new round of symptoms.

Timothy Davis and other young people shared their experiences Saturday at an event at First Baptist Church of Burlington. It was sponsored by the group, The Cause, Inc., a non-profit organization whose sole purpose is to promote an awareness of resources available for chronically ill people and their families.

The Cause, Inc., was begun by Stacy Murray-Medcalf, who attends First Baptist and is a cancer survivor. After battling the disease, she discovered a wealth of assistance through the American Cancer Society she had not known was available when she was sick. She vowed then to rectify this for other people.

“Our goal is to bridge the gap between provider and people,” Murray- Medcalf stated on her website.

In addition to the families who told their stories, such people as Candy Armstrong, clincical coordinator for Cabell Huntington Hospital in Huntington, W.Va., participated and explained the services available at her facility.

NELSONVILE — Wayne National Forest will offer four recreation fee wavier weekends during the summer and fall of 2012. “We... read more