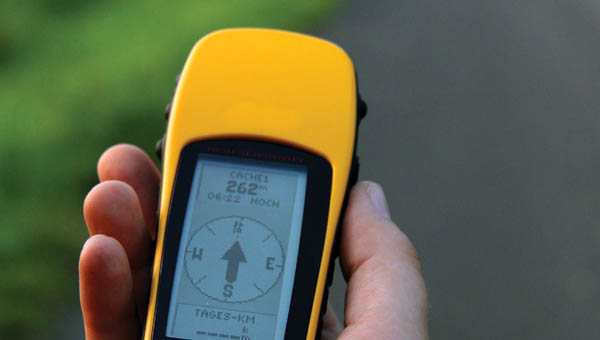 Finding coordinates on the geocaching website or using an app on a smart-phone, a person attempts to locate a cache, a container holding a log to be signed and dated by the finder.

SOUTH POINT — For the Saxton family, geocaching has become an addiction. It’s all about the thrill of the hunt, the celebrations of victory, and most of all, the time together as a family.

But what exactly is geocaching?

“Using multimillion dollar satellites to find Tupperware in the woods,” is how Joey Saxton, 47, of South Point, defines it. He and his wife Cyndi, 46, and their children Hannah, 17, Abigail, 14, and Caleb, 12, have been “caching” since 2010.

Finding coordinates on the geocaching website or using an app on a smart-phone, a person attempts to locate a cache, a container holding a log to be signed and dated by the finder. Joey said the containers range in size from as large as ammo boxes to as small as pencil erasers, and all sizes in-between, with some being camouflaged to increase the difficulty of the hunt.

Some of the caches will contain SWAG, meaning “stuff we all get,” from the person there last. It can be a small token to identify the geocacher, such as a marble, a pin or a coin. Others may contain trackables, which Joey said would have a number on it that can be registered online. The person who started that trackable will have a goal of where it will end up, and the cachers try to help it on its journey.

Caches range in complexity. Joey said traditional caches are simply locating the container and opening it up. There are also multi-caches, where the first cache will have coordinates to the next cache, each leading to the next. Mystery or puzzle caches will require a solution to the puzzle before the finder can get the coordinates. Earth caches are another type altogether.

“There are earth caches, where you don’t really go and find a physical container,” Joey said. “You find a geological formation or something like that. You learn about geology and answer questions and take a picture of yourself, usually in front of the formation, then answer questions, and send all that to the cache owner and then you get credit for that.”

While the earth caches can sound a lot like school to some people, Joey said they can be fun.

“There are some that take you to really cool places,” he said. “This weekend I went to one at Carter Caves, and you would never know it, but there off to the side is this huge waterfall, about 30 feet down into what they call Echo Canyon. It’s absolutely beautiful.”

Joey said he has seen places and learned many things about the Tri-State area through geocaching that he didn’t know, even though he has lived in this area his entire life.

After finding the location, the geocachers aren’t usually left hanging.

“In the description of the caches, they will usually give you a history so you’ll know why they put it there.”

Joey said finding a Revolutionary War cemetery in Guyandotte, W.Va., was another learning experience for his family.

“You learn about, not only geology, how to work a compass, how to work a GPS, but you learn things about history and your area that you had no idea was here. We go so fast sometimes from point A to point B and never stop to look at stuff. We have learned a lot of fascinating stuff about this area.”

How often people participate in geocaching depends on the individual or family, but some have goals in mind of how much they want to get into it. The Saxtons do it more often than most.

“Every day,” Cyndi said. While many people may choose to geocache on the weekends or days off, the Saxtons have been going for more than 200 days straight.

“There are different goals you can try to achieve,” Joey said. “My goal right now is to try to get as many consecutive days as possible.”

Joey said there are days when it’s a struggle to go out and look for the caches.

He said his family and his coworkers are a big encouragement to him.

Another favorite goal for the Saxtons is to be the “first-to-find.” When a new cache is published, the “first-to-find” is, well, the first to find it. By signing up for the alerts on a smartphone, the geocacher will receive a notification when a cache with the criteria you specify is published. The Saxtons have already tagged more than 40 first-to-finds, and there are times they have gone during some crazy hours to get them.

Joey said he has gone as late as 11 p.m. to get one, and as early as 4 a.m. “Abigail loves to go at night,” Joey said about his daughter.

As experienced as the Saxton family is, there are still some caches that have stumped them. “Those can be very frustrating, especially if you have multiple ones in a row,” Joey said. “They just suck the energy right out of you.”

Many caches have been hidden in cemeteries and whether that is OK is up for debate, depending on the state and the reviewer. While the Saxtons understand that there is concern that it could be disrespectful of the cemeteries, Joey said they are of the opinion that is just the opposite.

“Geocachers go into these places and have learned so much about these people who have been forgotten,” he said.

“We have found caches and then stayed for another half hour or 45 minutes just reading the tombstones,” Cyndi added. “One cemetery we were in, I was just broken. There was this lady’s tombstone and there were nine little tombstones out from it. It was all nine of her babies who had never made it to a year old.”

“It is so beautiful and they are trying now to restore it. Abigail and I were the only ones who went on that one, and we kept reading the tombstones. Back then, they put a lot of history on those markers. We were just reading it and learning so much about this person that everybody has forgotten.”

Another way geocachers try to show respect to the area is through events like CITO — Cache In, Trash Out.

“The goal is that when you go looking for a cache, and they actually have CITO events, and you take a trash bag with you, and as you’re looking for caches, you just gather up the trash at the park,”

Joey said. The Saxtons went to an event recently at Grayson Lake, where more than 30 bags of trash were picked up and taken out of the area.

When asked if this has become an addiction, Joey admits, it probably has. “But when you get that notification, there’s an incredible rush to go and just beat everybody. It’s just like any other sport.”

For the Saxtons, the biggest reason to geocache is the family time, getting everyone involved. “Somebody’s got the phone. Caleb’s firing up the GPS,” Cyndi said. “Even when we’re all in the car, we’re not in our own separate worlds. Someone’s pulling up the directions; someone else is pulling up the map.”

In addition to the family time, for Caleb, “It’s the adventure.”

For Hannah, it’s just getting to do something different. “It offers a lot of different scenery.”

Another perk of geocaching is that it can be a very inexpensive hobby. While some people may prefer the premium membership, at $30 yearly, and prefer to use a smartphone app and special GPS devices, it can be completely free. There are caches listed for free, and using the coordinates with a map will get you where you need to go.

Nearly anyone can pick up this hobby. The Saxtons have met an 18-day old baby at a geocaching event, and have also enlisted the help of Joey’s mother and his 98-year-old grandmother, who get equally excited about the sport. For anyone needing wheelchair accessible trails, that criteria can be entered when searching for a cache.

If you don’t know anyone who does it, Caleb recommends trying the free caches to ensure you love it before spending any money on a premium membership.

Recently, the Saxtons introduced a family from their home-school group to the sport, and they immediately fell in love with it.

“Go with a cacher and see if you like it.”