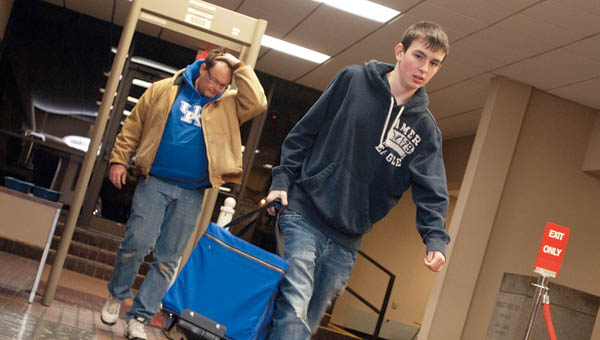 It was a rollercoaster ride for Richard Sketel as he paced the halls of the Lawrence County Courthouse Tuesday night.

Sketel, treasurer of Collins Career Center and the Lawrence County Joint Vocational School District, awaited unofficial tallies of a half-mill tax levy that would have a deep impact on the school’s financial future.

“I’m a nervous wreck,” Sketel said after the first round of ballots were counted, showing more than 60 votes against the levy.

By the end of the night, unofficial results from the county’s 84 precincts, and two precincts in Gallia County, showed the levy passing by only 40 votes.

“This has been the most nerve-racking thing I think I’ve ever been involved in,” Sketel said after he was able to sigh with relief.

The numbers were too close to call until all the precincts had been accounted for.

“In every update we received … there was never any breathing room for you to relax and take a break,” Sketel said.

So what did the levy mean for the district?

The five-year levy is projected to bring in about $300,000 a year for the school to keep in a state mandated set-aside fund to maintain the campus once its $22 million renovation project is complete. Because the state is paying 75 percent of the renovation project, the district has to set aside money for 23 years to make sure the facility is maintained.

The renovation project includes expanding classroom sizes by approximately 150 square feet and adding an additional 11,000 square feet to the building to meet code according to the Ohio School Facilities Commission.

The project would also modernize the cafeteria and repair a crumbling infrastructure, which includes repairing the sewage plant, heating and air conditioning, electricity and a leaky roof. The facility is the oldest educational structure in use in the county, built in the 1970s.

If the levy didn’t pass, Superintendent Steve Dodgion has said the renovation would continue but program and personnel cuts would be imminent.

Dodgion was in Columbus Tuesday night preparing for meetings about the renovation project but said he was pleased with the results of the primary.

“I believe that once the people in the county understood what was at stake for the career center, they stepped up,” Dodgion said. “I believe that we were able to get the message out. … I am thrilled to death.”

“I want to thank the voters of Lawrence County,” Sketel said. “This is something the school definitely needed. Without it, it would have been really catastrophic for the district.”

Sketel went on to praise campaign coordinator Eva Christian, as well as Dodgion and the school’s principal, Jim Howard, for getting the word out about the levy.

“It was a total team effort,” he said.

This year, the unofficial results in Lawrence County are 4,922 votes for the levy, and 4,831 against it. In Gallia County the levy failed with 94 votes against it and only 43 in support of it.