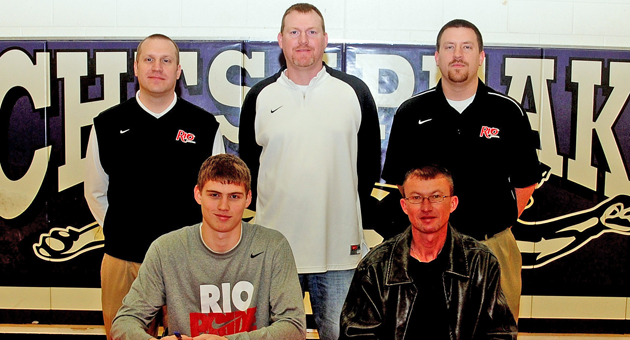 CHESAPEAKE — University of Rio Grande head coach Ken French was looking for a shooter, so he decided to look in a familiar place.

Returning to where he found P.J. Rase — the nation’s top free throw shooter two years ago at Rio Grande — French landed another Chesapeake as the Panthers’ senor forward Austin McMaster signed a letter-of-intent on Friday to play for the RedStorm.

A 1,000-point career scorer, McMaster has averaged 19.2 points a game along with 9.1 rebounds and 2.1 assists. He is shooting 51 percent from the field and 36 percent from the 3-point range. He also has 53 blocked shots this season.

“How much he plays depends on how quickly he adapts to the college game. We’re looking for him to be a shooter for us,” said French.

McMaster visited Rio Grande and said it was the right fit.

“I liked the campus and the players and the coaching staff is real nice,” said McMaster. “It felt like a great place to be and it’s close to home.”

McMaster expects to play a wing position and he knows he has the opportunity to play early. However, he isn’t taking anything for granted.

“I have the opportunity to play but I’ve just got to work at it and get used to how physical the college game is,” said McMaster.

“Shooting is the biggest factor and getting to the basket. I’ve seen them play and everybody on the team contributes. Hopefully I’ll make an impact.”

Chesapeake coach Ryan Davis praised McMaster for his hard work, athleticism and strong work ethic. Davis said those qualities will help him succeed at the next level.

But Davis was equally as impressed with McMaster the person.

“I’m proud of him. I’m more proud of him for the person he’s developed into,” said Davis.

“I’ve seen my son Carson come running in the gym yelling ‘Austin’ and Austin will lift him up to dunk it and help him get the ball and play with him. Those are the things that mean more to Chesapeake basketball. It’s the person he is more than the player he is.”

McMaster has been a three-year starter and helped the Panthers advance to their first-ever state tournament appearance as a sophomore. He was the Associated Press Southeast District co-Player of the Year and the Coaches’ District 13 Player of the Year as well as the North-South Game representative.

He has also been chosen to play in the Ohio-Kentucky All-Star Game.

The Panthers are 21-1 on the season and are three wins shy of reaching the Final Four a second time.

“I’ve had a good career. The state championship is still out there. I’d like to get that before I’m through,” said McMaster.

Rio Grande is a member of the Mid-South Conference, considered a physical NAIA Division I league. The RedStorm finished strong as they went 14-18 and lost 51-48 in the league quarterfinals to top-seed Lindsey Wilson who came in ranked No. 9 nationally.

French said McMaster has a chance to match Rio’s Evan Legg as the league’s Freshman of the Year next season.

“It’s a realistic goal for Austin,” said French. “This league gets a lot of D-I and junior college transfers. A lot of teams don’t look for high school kids to come in and play. Austin is the only high school kid we’re going to sign.”

McMaster plans to major in radiology.