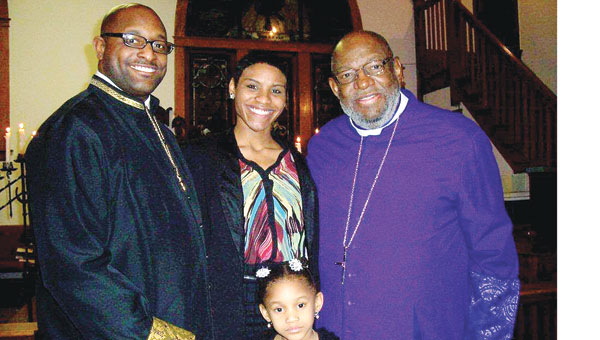 According to church records and current memory, which spans the last 70 years, a presiding bishop of the African Methodist Episcopal Church has never visited the Ironton outpost of the AME Church.

James Gordon, Quinn Chapel trustee and assistant minister, said bishops are assigned to the different districts of the international AME church and the district to which Quinn Chapel Ironton belongs encompasses the states of Ohio and West Virginia, and the Western portion of Pennsylvania.

According to church historical records, Quinn Chapel was officially formed prior to the Civil War, in 1856, in Ironton, and the current location on Eighth and Adams streets was first used in 1865 following the purchase of the land from Ironton’s founder, John Campbell.

The current structure was completed in 1909, and remains mostly unchanged since that time.

Henning was introduced by the Rev. Dr. Charles Holmes of the Third District. Prior to the service, devotions were led by the Rev. ReLoy F. Gainey, pastor of Young Chapel AME Church in Huntington, W.Va.

The afternoon music was provided by the choir from Young Chapel.

“During this event, certificates of appreciation were conferred upon African-American residents of Ironton who were either retired from the health care profession or actively employed as health care providers,” Gordon said. “These chosen persons were honored for their service, dedication, compassion, and the performance of vital services to the citizens of our community over the past several decades.”

Two people, Dr. William French and Sister Maxine Boykin, were honored posthumously for their roles in breaking through racial barriers thus paving the way for others to follow, and for their humanitarian services to the city.

The title of deaconess in the AME Church is an honor bestowed on a member who, over a period of many years, has exemplified ideals of tending to the spiritual needs of not only the congregation to which one belongs, but to the community residents as well.

“This distinction is a rare and great honor, one that has not been previously awarded to a member of Quinn Chapel during its known history,” Gordon said.

Members of a number of area churches also attended the event.