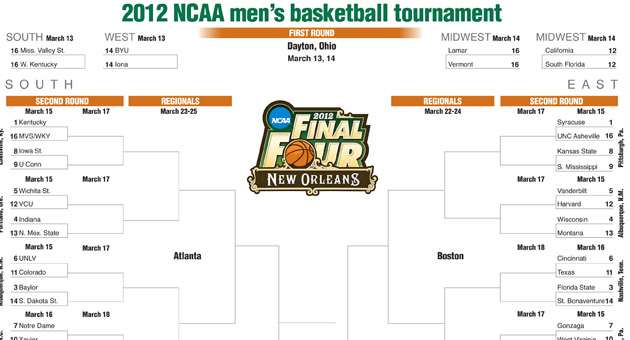 Kentucky, Syracuse and North Carolina tried to manufacture some chaos before the brackets came out. Like a group of 7-foot forwards roaming the middle, the members of the NCAA selection committee simply swatted all that noise away.

Even though they lost over the weekend, the Wildcats, Orange and Tar Heels turned out to be what they thought they were: top seeds — all armed with a well-timed bit of humble pie as they gear up for a run through the NCAA tournament they hope will end at the Final Four in New Orleans.

“It’s done now,” Kentucky coach John Calipari said of the 24-game winning streak that ended Sunday with a surprising loss to Vanderbilt in the SEC tournament final. “Now let’s just go onto these three weekends. We’ve got a weekend in front of us. It’s going to be a bear. Know what? Good. Throw anything you want to at us.”

Michigan State earned the last No. 1 seed and was the only one of the four top-billed teams to win its conference tournament. The Spartans defeated Ohio State 68-64 in the Big Ten title game Sunday — a contest widely viewed as the game for the last No. 1 seed, even if selection committee chairman Jeff Hathaway wouldn’t quite go there.

While No. 2 seeds Kansas, Duke, Missouri and Ohio State wonder whether they could have been rated higher, teams such as Drexel, Seton Hall, Mississippi State and Pac-12 regular-season champion Washington curse what might have been. Those bubble teams were left out, and all will be wondering how Iona, California and South Florida made it.

The Big East led all conferences with nine teams, including defending national champion Connecticut, a dangerous No. 9 seed, conference tournament winner Louisville and, of course, Syracuse, which cruised through most of the season with only one loss.

“I think it’s going to help us a little bit,” coach Jim Boeheim said of the second defeat, Friday to Cincinnati in the Big East tournament. “I think players, when they’re winning, they kind of excuse their mistakes. I think we finally got their attention. I think they’ll be a better team going forward than they were last week.”

There were 11 at-large teams from the so-called mid-major conferences, four more than last year and the most since 2004 when 12 made it. Though the committee claims not to consider a team’s conference when it picks the bracket, this was nonetheless a nod to the free-for-all this tournament can be. Last year, 4,000-student Butler finished as national runner-up for the second straight season, while VCU, of the Colonial Athletic Conference, went from one of the last teams in the newly expanded, 68-team draw, all the way to the Final Four.

It’s the question being asked across the country, as those $10 and $20-a-pop brackets start getting inked in at spring training sites, corporate board rooms and everywhere else across America. The tournament starts Tuesday with first-round games and gets into full swing Thursday and Friday, with 64 teams in action.

“There were 112 teams with more than 20 wins,” Hathaway said. “We talked a lot about parity at the high end of the field and about quality throughout the field. Bottom line, it was about who did you play, where’d you play them and how did you do?”

Some results, though, were less important than others, and apparently, losing in the conference tournament didn’t cost Syracuse, Kentucky or North Carolina. Those losses could have created chaos in the bracket, but the committee had the teams more or less cemented into top spots.

“Seeding really doesn’t matter too much,” Tar Heels guard P.J. Hairston said after Carolina’s loss to Florida State in the ACC title game Sunday, but before he knew his team would have a ‘1’ by its name. “As long as you get in the dance, it’s an equal opportunity to get to the Final Four.”

Led by freshmen Anthony Davis and Michael Kidd-Gilchrist, either of whom could be one-and-done in Calipari’s turnover-heavy program, the Wildcats are the No. 1 overall seed. Kentucky was placed in the South region and potentially could play six games without having to leave the Southeast.

Kentucky will open its 52nd NCAA tournament appearance in Louisville against the winner of a first-round game between Mississippi Valley State and Western Kentucky, but it gets tougher from there. A possible second-round opponent is UConn, with No. 4 Indiana possibly waiting beyond that. Before Sunday, the Hoosiers — who return to the tournament after a four-year drought — were the only team to beat Kentucky this season.

“The win streak? That’s done now. The fact that we were invincible? That’s done now,” Calipari said. “We’re going to be in a dogfight. That’s how you have to approach this.”

Second-seeded Duke got serious consideration for moving up to a No. 1, but an 18-point loss to North Carolina in the regular-season finale and a loss to Florida State in the ACC tournament certainly hurt. The Blue Devils are on the same side of the bracket with 11th-seeded Colorado, a team that got snubbed last year but won its way into the bracket this time by taking the Pac-12 tournament

The Pac-12 was woefully weak this year, placing only two teams and leaving Washington on the outside. This marked the first time the regular-season champion of a power conference got left out.

“Our guys are very, very disappointed, because I don’t think after winning the conference outright they couldn’t see any way we would not be in this tournament in their minds,” Huskies coach Lorenzo Romar said.

In the West, Michigan State will begin its quest for its seventh Final Four since 1999 against No. 16 LIU. The bottom of the West draw features No. 2 Missouri, which won the Big 12 tournament but got penalized for a weak nonconference schedule.

“That hasn’t changed at all over the years,” Hathaway said, when asked whether the committee rewards programs that beef up their schedules.

In the East region, Syracuse opens against UNC Asheville with a possible third-round matchup against Jared Sullinger and Ohio State. Other games include No. 3 Florida State, which went 4-1 against Duke and North Carolina this year, against No. 14 St. Bonaventure, which was a surprise winner of the A-10 conference tournament and took a bubble spot away.

“There must be a lot of people on the basketball committee that don’t know too much about basketball,” said Dragons coach Bruiser Flint, whose team went 27-6.

Others left out included Miami, Northwestern, Nevada and Oral Roberts. All had flaws, as did Iona, though the Gaels’ strength of schedule appeared to carry them through.

“We tried to play teams or conferences ranked above ours, and most of those games we really had to play on the road to get those games,” Iona coach Tim Cluess said. “We spent seven, eight weeks in a row on the road this year, but those were the teams we had to play to give ourselves a chance.”

Hathaway said the committee gave Kansas heavy consideration as a No. 1 team. The Jayhawks, however, lost to Baylor in the Big 12 semifinals.

“We’re fine with it,” coach Bill Self said. “I don’t think we deserve to be better than a 2. We may have been if we’d played well in (the Big 12 tournament), but we didn’t. I think after everyone gets through talking about the seeds, it’s about matchups anyway.”

Among the most intriguing would be a Midwest regional final pitting No. 1 North Carolina and former Jayhawks coach Roy Williams against those very Jayhawks — a game that would be played in St. Louis.