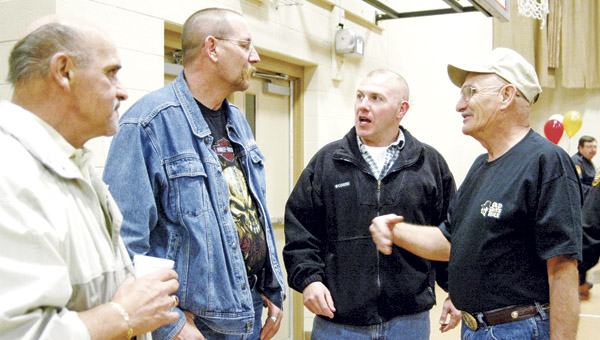 There was some good-natured joking and a lot of warm wishes Friday night for the man with a smile flashing underneath a graying mustache.

Friends and family gathered at the First Baptist Church Faith and Fitness Center to reminisce with Deputy Jerry Elliott, who is retiring from the Lawrence County Sheriff’s Office after 31 years.

Elliott was hired as a deputy in 1981. What kept him on the job those last 31 years?

As for favorite memories, Elliott said he has “too many to think of.”

What will he miss most about his time at the sheriff’s office?

“Being around the people I worked with,” Elliott replied.

Those coworkers will miss him, too.

Fellow Deputy Julia Jones said she will miss hearing his voice over the radio.

Sheriff Jeff Lawless described Elliott as “a good and loyal employee who went above and beyond (the call of duty).”

Ironton Police Dispatcher Kenton Jordan said he will remember that Elliott was “never in a bad mood, or if he had a bad day, he would never show it.”

Courthouse Constable Jean Aquista said she will remember how Elliott, who was once a volunteer firefighter for South Point, would bring his kids with him when he came to the fire station for meetings and routine things.

Retirement will allow Elliott to do the other things he said he likes to do: Ride horses and ride motorcycles.