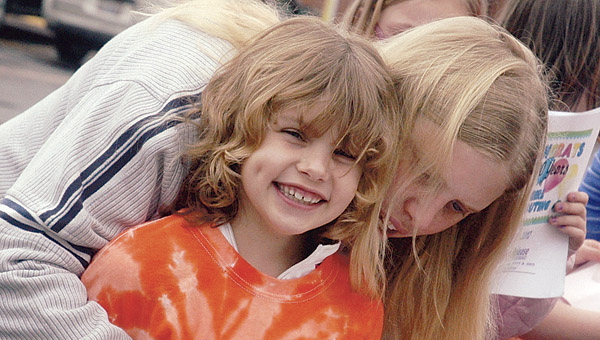 Angela Stapleton gets a hug from her mom, Opal Koster, while taking part in a sing-along at the Central Christian Church. This was part of the celebration of the 100th anniversary of Girl Scouts.

The intermittent rain Monday evening didn’t dampen the enthusiasm of the group of girls who stood outside Central Christian Church with balloons in their hands. When the signal was given, the balloons were sent skyward, the grand finale to a birthday party for a 100-year-old organization.

Area Girl Scouts threw a party to celebrate the birth of the Girl Scouts of America, founded a century ago in Savannah, Ga., but Juliette Gordon Lowe.

“The first troop started out with 18 members,” Stephanie Boyd, leader of Troop 1271, said. “There are 3.2 million members today.”

What is it about Girl Scouts that has kept the interest of young ladies over the years? Boyd said the girls learn how to work together, how to make friends and that they can something if they put their mind to it. And in so doing they learn to confidence. And they learn to be leaders.

Sarah Cecil waited in line for cookies after a sing-along.

Why did she join Girl Scouts?

“We can do a lot of fun activities and stuff and we get to talk and sing songs,” Cecil replied.

“We get to be with our friends and sing songs and make crafts and do all kinds of new things,” Peyton Black added.

“I like Girl Scouts because we get to go on field trips,” Abby Camp said.

Among the white balloons that bore the words “courage,” “confidence,” and “character,” the theme of the scouting program, there were 18 green balloons in honor of that first little scout troop in Savannah.