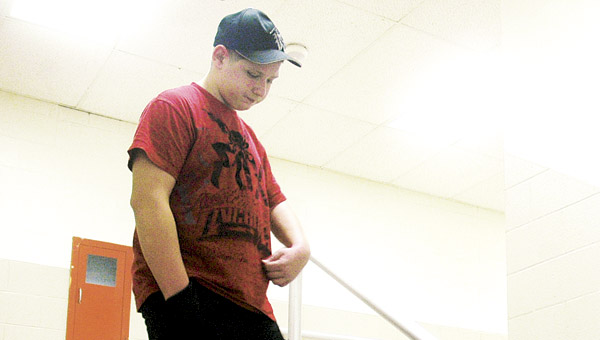 Rock Hill student Nathaniel Cheek makes his way up and down the stairs at the Rock Hill Middle School Tuesday. Cheek is wearing a NESSL300 Footdrop System around his leg. The system allows him increased mobility by sending pulses to the nerves in his leg.

PEDRO — Nathaniel Cheek has lived anything but a conventional life.

The young man suffered a traumatic brain injury in an automobile accident at the age of 5, which has caused him to have five brain surgeries since the accident.

Cheek has limited use of his left leg and arm. However, Wednesday, that changed.

The Rock Hill Middle School student was able to walk up a flight of stairs without any assistance. He hasn’t been able to do since the accident thanks to a demonstration by Bioness and its NESS L300 Foot Drop System.

“It feels great to see him do that (walk up the stairs), it’s the first time in a long time,” Kena Sites, a fellow student, said.

According to a brochure from Bioness, the NESS L300 Foot Drop System is an advanced functional electrical stimulation system that sends low-level electrical impulses to the common peroneal nerve in the leg, stimulating muscles to lift the foot. The system automatically senses, while the individual is walking, the foot position, any changes in the terrain and walking speed.

“We are now controlling one part of the way he is walking, which is lifting up his foot,” Charlie Miranda, OTR/L clinical specialist with Bioness, said. “The goal is to reeducate the muscles up his leg.”

Cheek had to learn basic life skills all over again, everything from eating to using the restroom.

“He couldn’t do anything for himself,” Marsha Sly, Cheek’s mother, said. “It was like he was an infant. He had to be retrained on everything. The doctors didn’t give him much of a chance.”

The device cost approximately $14,000. Sly applied for the funding through the Bureau for Children with Medical Handicaps (BCMH) but was denied.

According to the letter sent to Sly from the Ohio Department of Health; rule 3701-43-18 (E) of the Ohio Administration Code, this service is not eligible for authorization on the BCMH program.

“I have already sent in the appeals letter,” Sly said.

The Rock Hill middle school junior honor society raised the down payment on the equipment and is looking for donations to help Cheek keep his device beyond the 30 days.

“We basically had fundraisers. We had bake sales to raise the money for the device,” Sites said.

Along with Sites, Lexie Munion, Sami Dillon, Riann Keating and Seth Miller make up the honor society at Rock Hill Middle. They raised more than $1,100 for Cheek to get the 30-day trial period.

“It almost brings tears to your eyes,” Michael Hairston, principal at the middle school, said. “The fact that we had a fellow student in need of something that the state wouldn’t provide and these guys jumped in and did it. The gambit of emotions, anger at the people that refused him, proud beyond belief of my children because they stepped up to the plate. We are going to try to ask for donations from other people, a few are starting to come in.”

“It’s very emotional to see that we can help someone move toward a more normal life,” Hairston said.

Timetable expected after Vinton canvas By no later than the first Friday in April voters in a four-county district should... read more