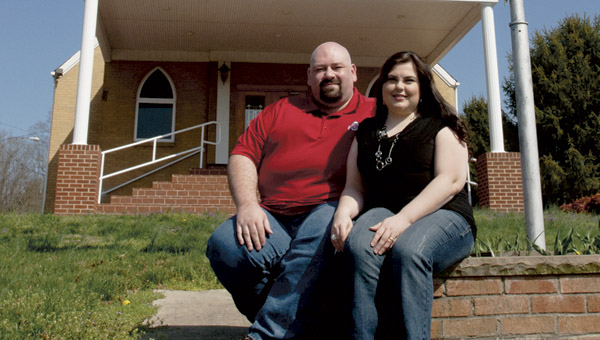 Ed and Jamilaih Gullett, members of Zoar Baptist Church, are making plans for a mission trip to Belize.

COAL GROVE — Ever get a message so loud and clear that it totally changed your life?

Ed and Jamilaih Gullett recently did at the altar of Zoar Baptist Church in Coal Grove. And that message is leading them far south of the 740 area code.

Ed, who along with Jamilaih calls Zoar his true home, knows a thing or two about being a travelling preacher. His missionary services as a fill-in pastor to local churches have been utilized for the past four years throughout the Tri-State.

He also knows a thing or two about reaching out to others in need, which is evidenced by The Shepherd’s Closet, a local food and clothing pantry set up a few years ago by him and Jamilaih to reach out to the poor.

Now, the hearts they have spent years honing on Jesus are leading them to the Central American country of Belize to spread His message of hope.

“I’ve been preaching for a little more than four years,” Ed, 34, said of his decision to become a missionary. “God just tugs at your heart sometimes and makes you aware that you are supposed to be doing something.”

When he first began to realize what God’s plan for his life was, he sought guidance from his pastor, Jim Beals, and his grandmother, Anna Steed, a lifelong Zoar member whose advice he had always greatly respected.

Beals prayed with and for Ed, advising him to do the same thing in earnest.

“He’s been there for me the whole way,” Ed said.

“She said, ‘I always find my answers at the altar,’” Ed laughed, noting that as a preacher that should have been the first thing he thought to do.

“One night I went there and I got my answer,” he recalled.

Convincing Jamalaih to pack up and move south was, as one might expect, a difficult sell.

But after a month of praying, Jamalaih came to her husband one day and said, “We need to talk.”

With her affirmation of, “We need to do this,” Ed was thrilled that his wife’s prayers had lined up with his. The ball was in motion.

Prayers led him to mission boards, which oversee churches that sponsor missionaries. Then, he and Jamilaih became friends with missionairies who are presently serving in Belize.

In the next few months, The Gulletts will make their initial trip to Belize. From there, they will rely on a gracious God to take care of their needs as they spend their time spreading the word of Jesus Christ to others.

To assist with the cost of their trip, Ed and Jamilaih have organized an auction called The Gulletts to Belize Fundraiser. The auction will be held at the Jae Roush building in Coal Grove on June 15, beginning at 4:30 p.m.

Many items have already been donated for the cause. Ed is praying for big-ticket items to boost interest in the auction.