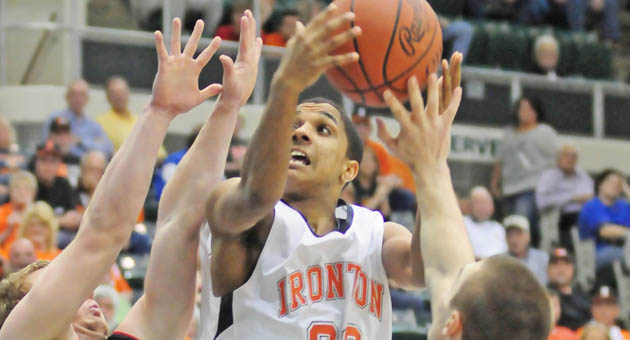 Ironton Fighting Tigers’ junior guard Zac Carter leaps into the air as he scores two of his 21 points in the 49-48 regional semifinal win over Coshocton. (The Ironton Tribune / Kent Sanborn of Southern Ohio Sports Photos)

ATHENS — The first two were for pride. This one is for keeps.

Ironton beat Portsmouth 66-52 at home early in the regular season. Portsmouth returned the favor with a 59-53 win at home.

The rubber match is set for 7:30 p.m. Saturday in the Division III regional championship at Ohio University with the winner advancing to the state tournament.

Saturday’s winner will play in the state semifinals at 8:30 p.m. on Thursday at the Schottenstein Center on the Ohio State University campus against the winner of Friday’s game between Lima Catholic (22-2) and Ottawa-Glandorf (18-6).

Lima Catholic won the state title two years ago including a win over Chesapeake in the state semifinals.

Portsmouth won the regional title last year only to lose in the state semifinals. The Trojans have 24 state tournament appearances including four titles and three runners-up.

Ironton reached the state tournament in 1994 and 2005 when they were state runners-up to North College Hill with O.J. Mayo and Bill Walker.

Portsmouth is led by 6-foot-6 senior center and Southeast District Co-Player of the Year Dion McKinley who averages 19 points and 11 rebounds. Wayne Evans — a 6-2 senior guard — is second on the team in scoring at 16 points to go with 7.0 assists and 3.0 steals.