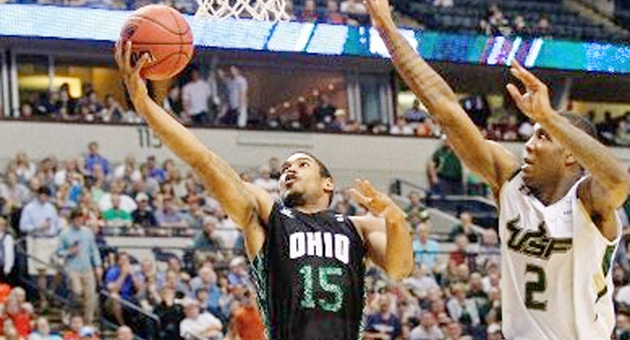 “This is amazing,” said Offutt, a transfer from Ohio State by way of Wright State. “It’s one thing to talk about it and one thing to actually do it. This has been unreal, but let’s just continue the run.”

Ohio is the seventh team seeded No. 13 or higher to advance to the regional semifinals and the first since No. 13 Bradley did it in 2006. None of those teams won its next game.

The Bobcats (29-7), who opened the tournament with an upset against fourth-seeded Michigan, will play No. 1 seed North Carolina in St. Louis on Friday in their first trip to the round of 16 since they lost to the Wolverines in the regional finals in 1964.

The Bobcats had a 59-53 lead when Toarlyn Fitzpatrick connected for South Florida’s first 3-pointer of the half. But Cooper went 3 for 4 from the line while the Bulls missed three shots in the final 36 seconds.

“I do think our guys have a chip on their shoulder,” said Ohio coach John Groce, who has led the Bobcats to two NCAA tournaments in his four seasons with the team. “I think our guys look forward to playing on the big stage against quality competition.”

Victor Rudd Jr. and Anthony Collins scored 13 points apiece and Augustus Gilchrist had 12 for the Bulls (22-14), who were playing in their third game in five days with a travel day in between. South Florida beat California on Wednesday and Temple on Friday night in the second round.

If fatigue was a concern for South Florida, it didn’t show. The Bulls relied on their stingy defense to limit Ohio to just 30.4 percent shooting in the first half.

Although the Bulls managed to keep the Bobcats away from the rim, they couldn’t stop them at the perimeter. Half of Ohio’s second-half buckets were 3s, and the Bobcats finished 9 of 18 from long range.

“It really seemed like they hadn’t missed any 3s in the second half,” Collins said. “We just didn’t execute our defensive assignments the right way. They got open and made the shots.”

Two of their five treys in the second half came after either a flagrant or technical foul.

Rudd was called for the flagrant, and Offutt hit both of his free throws and a 3-pointer that tied it at 31 with 15:52 to play.

Jawanza Poland was given the technical after hanging on the rim following a dunk. Nick Kellogg sank both free throws and a 3-pointer that again tied the game, this time at 42 with 9:23 to play.

Just over 2 minutes later, the Bobcats put together the 10-0 run that gave them the lead and control, and the Bulls missed out on a shot at being the only team from the first four games to advance to the Sweet 16.

“It wasn’t like we didn’t play,” South Florida coach Stan Heath said. “We lost to a good basketball team.”

The Big East’s top scoring defensive team and the Mid-American Conference tournament champions turned out to be a good match for one another.

Strong defense from both sides turned the first half into a slow-paced affair. South Florida managed just 40.7 percent shooting in the first 20 minutes.

The Bobcats had the hot hand first. D.J. Cooper sank a 3-pointer, Reggie Keely hit a pair of free throws and a steal by T.J. Hall led to a layup by Cooper that gave Ohio a 12-6 lead 6 minutes into the game.

Victor Rudd Jr. answered with a resounding alley-oop dunk on a pass from Anthony Collins that launched a 13-1 run by the Bulls. A 3-pointer by Rudd gave them a 19-13 lead with 5:31 in the first half, and South Florida held a 27-21 lead at halftime.

Ohio stayed in the game with its perimeter shooting, going 4 for 10 from long range in the first half, while South Florida relied on its size. The Bulls outscored the Bobcats 16-6 in the paint in the first half.

“We didn’t do anything differently (in the second half),” Offutt said. “Coach told us to come out and swing aggressively from the start. We went out there and played aggressively and hit some shots. We were fortunate to beat a tough team at the end and got the win.”

The Associated Press   So much for the little guys. Instead of parlaying an historic day of upsets into a... read more