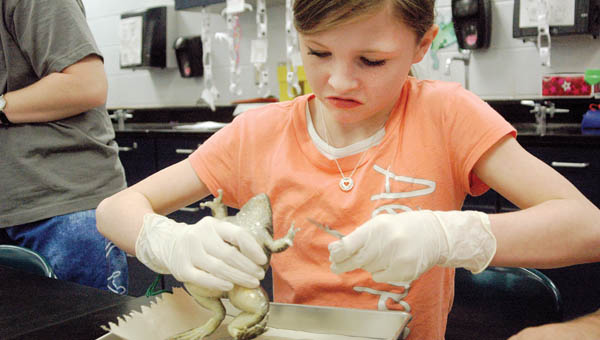 CHESAPEAKE — Shayla Little poked a pair of slim dissecting scissors into the mouth of a white-bellied frog with the steadiness of a brain surgeon, undaunted that the object of her attention was cold, wet, slimy and very, very dead.

“This is cool,” she told her fisherman-father who expected nothing less from his daughter.

“She likes to watch me cut up fish,” Raymond Little said. “She thinks that’s the coolest.”

So for the next hour Shayla was in seventh heaven as she and her father joined into Family Fun Science Night at Chesapeake Middle School Monday night.

“This is to introduce more math and science to students and have family engagement,” said Denise Shockley, superintendent of the Gallia-Vinton Educational Service Center that administers area after-school programs.

Chesapeake started an after-school program three years ago where students spend a couple hours after the class day is over getting help with homework. Their reward is learning a new skill, ranging from cooking to wreath-making to Spanish to dancing.

It’s a program that has paid dividends for Tayte Combs, according to his father.

“This program has helped him tremendously,” Mark Combs said. “He has brought his grades up two (letters) in all and he loves it.”

At science night the pair learned how white milk can be tie-dyed with a little help from a housewife’s favorite grease-cutting dish liquid. Instructor Kathy Brock had the father and son drop red, blue and green food coloring into the center of a plate of milk. Then with just a touch of Dawn the colors scattered into a kaleidoscope of pastels.

“We are causing the fat particles to move away,” Brock explained

While the science sessions were geared to maximize the fun in discovery, like the uncrushable egg or the invincible balloon, there was a long-term practicality to the event.

“All your jobs in the 21st Century will require more math, science and engineering skills,” Shockley said. “Students will have to be very grounded in those skills to get those jobs.”

The initial plan was to develop a riverfront park on 11 acres of land adjacent to the Center Street Boat... read more