IHS gets national award for design 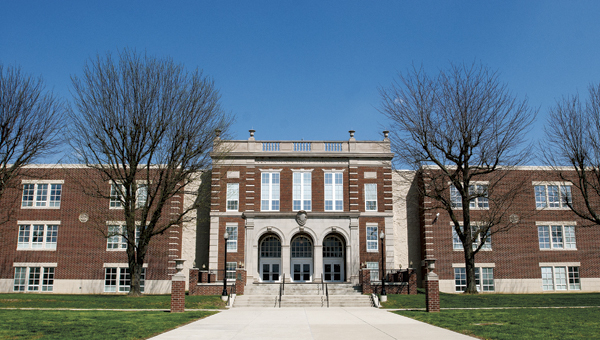 Ironton High School was recently recognized for its architectural design.

Ironton High School has gotten an award from a national architectural design magazine.

Learning By Design, a publication of Stratton Publishing, Inc., has included IHS in its list of Outstanding Project New Construction awards for 2012. Ironton was one of 18 high schools across the country selected for the honor. The magazine praised the district, its architects Fanning-Howey, of Dublin and other construction partners for blending elements of the old building with a modern structure that meets the needs of students.

“To meet the funding requirements of the Ohio School Facilities Commission, Ironton City Schools was required to build a new high school rather than renovate the existing facility. Knowing the importance of the school’s history to the community, designers set out to respect Ironton’s past and provide for its future,” the Learning By Design article said. “Preservation efforts retained the existing three-story main entry and library, surrounding it with a new 21st century learning environment. Other items were harvested from the old building and incorporated into the new, including a stone archway, a ticket booth, stone medallions and urns, pendant light fixtures, and a display of old playbills. The archway is now prominently featured in the cafeteria, with other items showcased throughout.

“The use of brick and buff-colored concrete masonry unit complements the character of the preserved ceremonial entrance. Fenestration in the new brick elevation mimics the old building, but in a modern, economical way.

“To promote flexible learning, the three-level academic wing creates a series of small learning communities. The two-story media center is located on the second floor, with easy access for all. Customized desks were designed with the help of a committee of Ironton teachers, and all classrooms feature interactive whiteboards with clicker systems. Floor-to- ceiling windows in classrooms allow for the positive effects of daylighting.”

Superintendent Dean Nance said he was very happy with the school’s inclusion in the magazine.

“It’s a great honor. We felt it was a wonderful project that serves our needs very well. We’re glad someone other than the kids who use it and the people who work there realize that,” Nance said.

Ironton High School, completed in 2010, replaced a building constructed in 1922. The city school was on the awards list with high schools in Eaton, Ga., Quincy, Mass., and Blanchard, Okla.