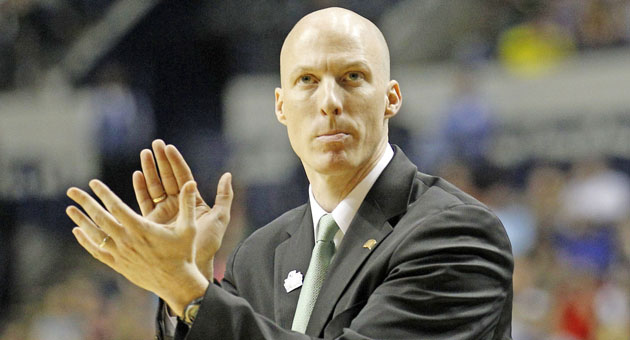 Ohio Bobcats’ head coach John Groce encourages his team during their recent wins in the NCAA Tournament. Ohio has reached the Sweet 16 for the first time in school history. (The Ironton Tribune / MCT Direct Photos)

ATHENS (AP) — Walter Luckett arrived in the ‘70s, made a magazine cover and created a stir, but left without getting the Bobcats very far.

Gary Trent morphed into the “Shaq of the MAC” in the ’90s, taking the program to national heights that didn’t translate at tournament time.

Ohio University went 48 years looking for more than one shining moment in the NCAA tournament, going through seven coaches and a handful of stars without advancing past that opening weekend. It’s finally changed for the school nestled in the hills of southeast Ohio.

The Bobcats have become the tournament’s latest mid-major darlings, knocking off Michigan and South Florida to reach the round of 16 for the first time since 1964. They’ll play North Carolina on Friday in St. Louis.

The long wait has made it sweet indeed.

“It’s very warming,” Trent said in a phone interview from Minneapolis, where he’s an elementary school intervention specialist. “It’s so great to see them advance. There’s only 16 teams playing in the country, and Ohio U. happens to be one of them.”

Even though the school was on spring break, the students still around campus jammed Court Street after the 13th-seeded Bobcats ousted Michigan in their opening game. Then, the Mid-American Conference tournament champions topped the Big East’s best defensive team for another celebration that got more than just the town talking.

“This has been unreal,” said Walter Offutt, a transfer from Ohio State. “Let’s continue the run.”

Their win on Sunday became an immediate talking point. Clark Kellogg was calling the Lehigh-Xavier game when Ohio finished off the Bulls, giving him a chance to exult on the air. Kellogg’s son, Nick, is a sophomore guard for the Bobcats.

The postgame celebration was shown on TBS and got more rave reviews. School President Roderick J. McDavis, dressed in a green Ohio jacket, gave players a pep talk: “I told you a few weeks ago there was another level!”

Now, the school has something to talk about other than parties and potatoes.

Ohio, which is known regionally for its annual Halloween party, was ranked the top party school in the country by the 2011 Princeton Review last summer, an annoyance to administrators who have been trying to change that image.

“Honestly, I don’t know where that party thing comes from,” Trent said. “I’ve been on other college campuses. It’s no more wild than any other.”

The football program got its first bowl victory in December, beating Utah State 24-23 in the Famous Idaho Potato Bowl with a touchdown drive in the last 2 minutes.

The basketball team was looking for a breakthrough as well — that Sweet 16 thing. Ohio had a chance in 2010 when it beat Georgetown 97-83 in its opening game, then played poorly in an 83-68 loss to Tennessee.

Coach John Groce, who helped Thad Matta take teams to the tournament as an assistant at Butler, Xavier and Ohio State, changed his between-game approach this time to limit the distractions. He took away their cell phones and limited their internet access between games.

“It wasn’t punishment,” Groce said. “They did have a couple of hours after they got back to return some of their text messages and emails and tweets and Facebook and MySpace and email, whatever else they do. So we gave them time to do that.

“Then we grabbed the phones, and not one guy — that’s how I knew this team was really locked in — not one single guy complained.”

Groce is getting much credit for the long-awaited breakthrough.

“The biggest thing for him — and he’s done a great job of it — is getting his team to play at the right time,” Ohio State’s Matta said. “As crazy as it sounds, if they don’t win the MAC tournament, they’re not in the NCAA tournament. That’s something he and I had spoken about going into the MAC tournament, knowing that hey, we’ve got to play our best basketball.”

The Bobcats also were in the poll during the 1994-95 season, making it as high as No. 14 behind Trent, a three-time MAC scoring champ.

Ohio expected great things when Luckett, one of the nation’s top prep scorers, picked Athens. He was featured on the cover of the Nov. 27, 1972 cover of Sports Illustrated for a feature story on freshmen, shown dribbling with his left hand at midcourt at The Convo.

The issue included an ad with Joe Namath sitting in a recliner and another one for an eight-track cartridge recorder.

In the SI story, Luckett noted that Ohio State got more attention back then, but that could change.

“I’ll be followed here,” Luckett said. “I’ll be known. I hope I can take the school with me.”

It took a lot longer for the Bobcats to arrive.