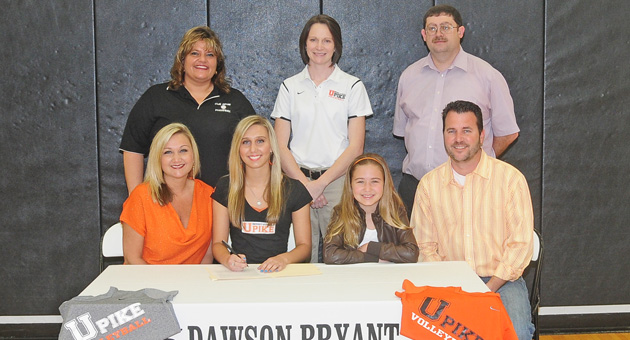 COAL GROVE — When Haley Johnson’s senior volleyball season ended last fall, she wondered what life would be like without the sport.

After a day or two of reflection, she decided life would have to continue with volleyball.

“I just love the game,” said the Coal Grove Lady Hornets’ senior standout who signed a letter-of-intent with the University of Pikeville to play volleyball.

“Honestly, I’m just glad to be part of a team and to keep playing and doing something I love to play. I couldn’t see myself giving up volleyball.”

During her career at Coal Grove, Johnson was a four-year starter who was first team All-Ohio Valley Conference, first team coaches’ all-district, and she helped the Lady Hornets to their first OVC volleyball title last season for the first time since 1991.

Lady Hornets’ coach Trisha Damron had nothing but praise for Johnson and thinks the senior will be a success at the next level.

“She’s been a member of the varsity all four years. She was a co-captain as a sophomore. She just led the team,” said Damron.

“She’s an all-around player. If you could have six of her, you’d have a great team. She’ll fit into any program.”

“She fits very well. She’s a good fit in all areas,” said Gassman. “We want someone with character and integrity who is a good student and a hard worker and Haley fits that.”

Johnson said Pikeville is “pretty young and they’re pretty good.” She went for a visit and a workout and fell in love with the school.

“I had such a blast playing with their team and meeting the coaches,” said Johnson.

“I see me more of a back row hitter, but it’s where ever they want me to play. Hitting is a lot of fun, but I just love the game. It doesn’t matter where I play as long as I get to keep playing.”

Johnson plans to major in communication in order to transition to pre-law.

BOSTON (AP) — Ohio State coach Thad Matta sized up his team in the middle of the season and had... read more