Chili fest brings out the connoisseurs 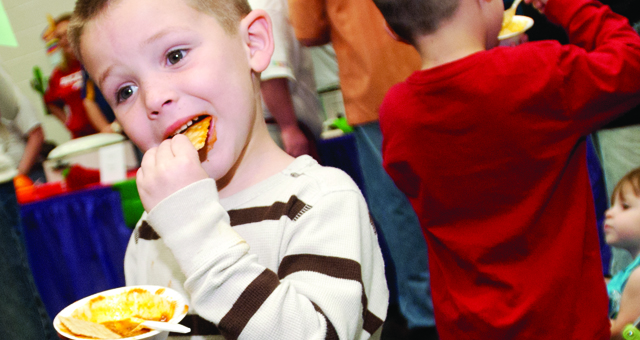 The cooks and the people who love what the cooks made packed the Dawson-Bryant High School gym Saturday for the 13th Annual Chili Fest and Craft Show for Developmental Disabilities Awareness.

It was a day when trade secrets were shared as participants sampled and sampled chilis ranging from one that went whole hog with pork sausage to a dish that was ‘hold the tomato.’

Layering was the key to the chili Amanda Evans made for the entry for PNC Bank.

“Some of the ingredients are cooked with the beef and the other half with the tomato sauce,” said Evans who was entering her first chili contest.

Likewise, Pete Lunsford of the Lawrence County Tactical EMS was a novice contest participant but had done his research into what makes a chili winner. Lunsford, who has been creating themes and variations of the hearty soup for 15 years, believed the secret was in the choice of meat. His had sirloin tips cut into three-quarter inch cubes and simmered for hours until it was smooth and thick.

The Young Professionals, part of the Greater Lawrence Chamber of Commerce, added the chili fest to its roster of community involvement by offering a chili devoid of that juicy red fruit most typically the backbone of any chili recipe.

“This was handed down from my great-grandmother,” Crystal Ramey said.

It had three kinds of beans, ground chuck and water, instead of tomato juice or sauce.

Bob Dalton had a simple inspiration for the stew he cooked up for his church, Greater Faith Apostolic.

“A little Cajun guy in Louisiana,” Dalton said about where he got the idea for his chili that merged ground beef with ground pork.

Last year the Ironton Lions Club rated People’s Choice and were out to see if it could be done twice in a row with Joe Wiseman as the chef.

“It brings out a lot of people who want to help with DD,” Lou Pyles, Lions Club member, said. “People love chili and it is for a really good cause.”

This year there were 29 chili chefs showing off their wares along with craft and health screening booths.

“This is just a small community thing and the community really responds,” Tim Nunnery, public information officer for the Board of DD. “People seem to really love it.”