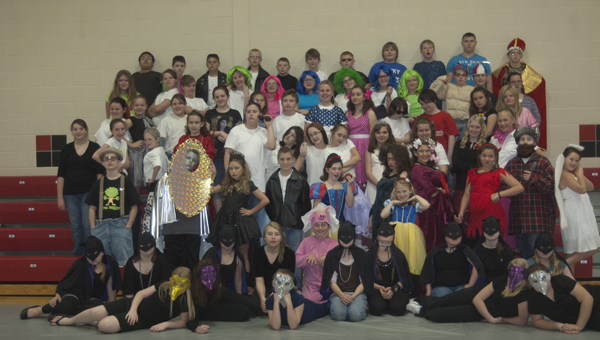 Under the direction of teacher Ronda Hall and Lee Ann Cremeans, nearly 90 students danced and sang to “The Rockin’ Tale of Snow White,” a musical that paired rock and roll, hip-hop and doo wop songs with some tongue-in-cheek humor.

Complete with a rapping Magic Mirror, a leather-clad Prince Charming and some colorful dwarfs, the musical had students laughing and dancing in their seats at Monday morning’s dress rehearsal in the school’s cafeteria.

And with such a large cast, extra characters and songs were added, Hall said.

“With so many kids, I have taken characters and songs from other plays and incorporated them because this play is only supposed to be cast for 20 people,” Hall explained.

There was even a cameo appearance and song by Cinderella, played by Camyrn Oding, and her two “beauty-impaired” stepsisters, played by Caitlin Robinson and Kylie Deer.

“Everybody loves that song,” Hall said.

Other crowd favorite song was the rap performed by Payten Smith as the Magic Mirror.

“It talks about the queen and how she thinks she’s the best, but she’s not,” Smith explained. “And how Snow White is prettier.”

Smith said he was definitely excited about the performance.

Sydney Meadows, played leading lady Snow White. She said singing the high-pitched parts were hard, but that the experience was fun.

“It made me feel like a star,” Meadows said.

Prince Charming was played by Evan Holmes, who said the musical was fun, especially getting to see everyone act silly during rehearsals.

The Evil Queen was played by Hayden Johnson. She said she liked the opportunity to play a villain.

“I got to act like a totally different person,” Johnson said.

Hall said the annual fifth grade musical is an opportunity for the children to shine on stage.

“They have to sing 16 different songs,” Hall said. “For them to put on a production of this magnitude, for 10- and 11-year-olds, I think it’s pretty amazing.”

At the end of the production, the students surprised the audience with a flash mob dance to the song “Party Rock Anthem.”

SCOTTOWN — A man who went missing March 13 from his home in eastern Lawrence County has been found... read more