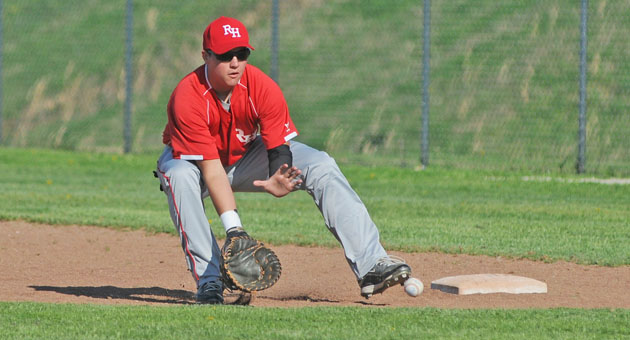 Rock Hill Redmen first baseman Johnathan Schob prepares to field a ground ball during a 19-7 win over the Symmes Valley Vikings on Monday in the season opener for both teams. (The Ironton Tribune / Kent Sanborn of Southern Ohio Sports Photos)

PEDRO — Patience is a virtue. It’s also a good way to get a win.

The Redmen parlayed 14 walks with nine hits into a 19-7 win over the Symmes Valley Vikings on Monday to open the season.

“We were patient at the plate. We didn’t strike out, so that’s a good sign,” said Rock Hill coach Barry Litteral.

“Pitching-wise, we just have to get some games under out belts. It was a typical first game.”

After a scoreless first inning, Rock Hill sent 17 batters to the plate in the second inning and scored 13 times.

Jared Bruce had a two-run single and Evan Morris a two-run double to highlight the uprising.

The Redmen got six runs in the fourth inning to take a 19-6 lead. Ryan Depriest had a two-run double and Drew Kidd an RBI single to spark the rally.

Kidd went four innings to get the win with Bruce finishing up. The two combined for five strikeouts and eight walks.

Kidd also went 3-3 at the place to lead the nine-hit attack. Austin Kidd and Depriest each had a double.

The Redmen host Gallipolis on Tuesday.