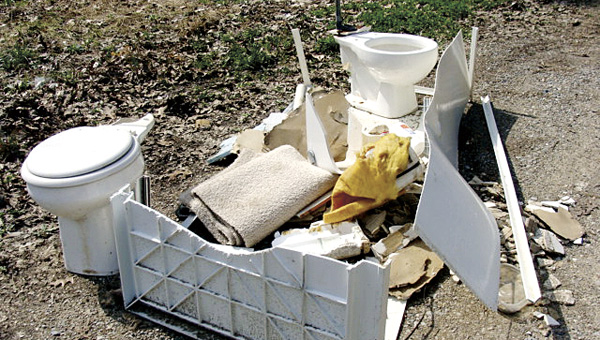 Piles of home remodeling debris illegally dumped on County Road 218 have led to a fine and probation for a loca contractor.

It started with an anonymous phone call from a concerned citizen who told authorities he saw someone illegally dumping home remodeling debris on County Road 218 (Tunnel Ridge Road). It has ended with the sentencing of a local contractor for illegal dumping.

Buddy Miller, 26, who lists an address of 453 Township Road 253, E., Ironton, but who also said he lives in Kentucky, was sentenced last week for illegally dumping debris on a road behind Rock Hill Elementary School in Elizabeth Township. Ironton Municipal Court Judge O. Clark Collins sentenced Miller to 60 days in jail but suspended the sentence and placed Miller on one year of probation. Miller was also ordered to pay a $200 fine and court costs.

“We investigated an anonymous call,” Lawrence-Scioto Solid Waste Management District Enforcement Officer Steve Hileman explained. “Someone saw him and got his license number. We will follow up on anonymous calls and we will follow through on them. Judges on both ends of the county are on board with us because they’re fed up with this.”

Dan Palmer, solid waste district director, praised both judges and the prosecutor’s office staff for being willing to punish people who flout the law and litter or dump illegally.

COAL GROVE — If you live in the village of Coal Grove, you may have noticed a new police vehicle... read more