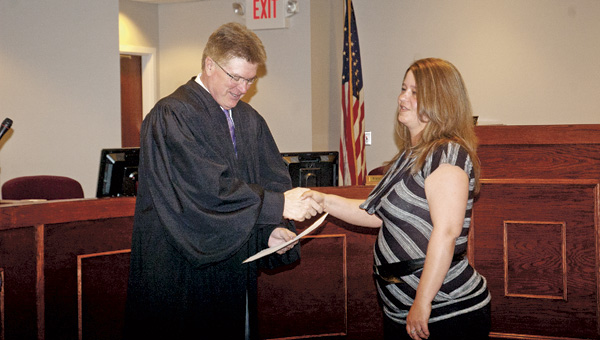 Judge O. Clark Collins swears in Diana Wise as the new clerk and treasurer of the Village of Coal Grove.

Beginning in April, there will a new face at the Coal Grove village hall.

Diana Wise will take her post as village clerk and treasurer. Wise was sworn in Thursday by Judge O. Clark Collins at Ironton Municipal Court.

“I’m looking forward to working with the people in the village who supported me and I’m ready to go to work for the people,” Wise said. “I’m glad they’ve given me the opportunity to work for them.”

Lawrence County Commissioner Les Boggs was among those at the swearing-in to support Wise.

“I’ve known Diana for a long time and I think she’ll do a great job,” Boggs said.

A first-time officeholder, Wise said she attended the auditor’s conference and the Uniform Accounting Network seminar in Columbus to train for her new post.

Wise was elected over incumbent Debbie Fields in the November general election.

Piles of home remodeling debris illegally dumped on County Road 218 have led to a fine and probation for a... read more