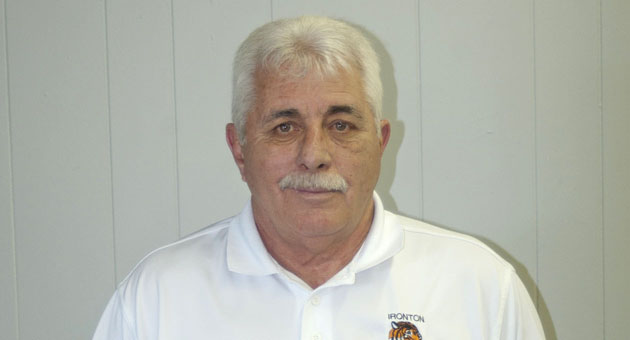 Long-time Ironton announcer and booster Rick McKnight was honored for his years of service by the Southeast District Board. (The Ironton Tribune / Jimmy Walker)

The envelope please…and the award goes to Rick McKnight.

It wasn’t an Emmy or the Oscar, but it probably means more to Rick McKnight than any award someone can receiver.

Having spent the past three decades working in the Ironton Tiger Clan as well as 25 years as the public address announcer for football and basketball, McKnight was honored by the Southeast Ohio District Athletic Board as a recipient of a “Friend of Youth Award.”

McKnight remembers his first game as announcer. It was a football game against Portsmouth.

“I was out selling split-the-pot tickets and (athletic director) Mike Burcham came and got me,” said McKnight.

“He said they need an announcer and he had to coach so he didn’t have time to look for anyone else. He said, ‘You announced some games at Coal Grove didn’t you?’ I said ‘yeah’ and he said, ‘OK, then. Get the lineups and get up in the press box.’ I don’t know how he did it, but you could never tell Mike Burcham ‘no.’”

Burcham remembered the incident along with a few others. It was Burcham who dragged McKnight to a Tiger Clan meeting. When the meeting was over, McKnight had somehow emerged as the Tiger Clan president.

“Rick McKnight has done more for the athletes at Ironton than anyone knows. He has been a friend to the players, the coaches and anyone associated with the program,” said Burcham.

“For someone to do all that he has done not only as an announcer but with his work in the Tiger Clan, he’s more than deserving of the award. You don’t find people who give their time like that for 30 or 35 years. Every program needs people like Rick McKnight to make it work.”

McKnight replaced Paul Houston who was forced to retire due to health problems. Houston — who recorded several gospel albums — was known for singing the national anthem before games.

“That was Paul Houston’s baby. As long as we have Whitney Houston (on tape) you’ll never hear me,” said McKnight with a laugh. “And I promise you the fans don’t want to hear me.”

The Southeast District Board established an award to recognize men and women who have provided long and dedicate service as timers, announcers, scorekeepers, team physicians or chain crew volunteers.

The “Friend of Youth Award” honors those volunteers to give countless hours of service over many years to help school athletic programs function smoothly.

Lady Tigers second in own meet

By JIM WALKER Tribune Sports Editor   It wasn’t how they started but how they finished that made Tim Thomas... read more