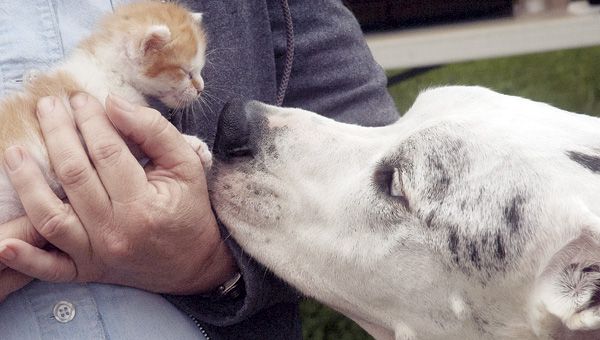 Deebo the Great Dane checks out Angel, a 3-week-old kitten as it is bottle fed at Saturday’s Pet Blessing at Resurrection Hope United Methodist Church.

The creatures came great and small with fur, feathers and even a rat tail to show they are part of God’s world.

Each one marched to the table set up on the sidewalk outside Resurrection Hope United Methodist Church where Pastor Todd Wallace blessed them during a special ceremony Saturday afternoon.

“This is something I had seen at other places and I am an animal lover myself,” Wallace said before the blessing. “These are God’s creation. They are not the fallen ones. We are.”

Cortni Layman, a member of Resurrection Hope, brought her two Great Danes, 8-year-old Daisy and 10-year- old Deebo, the latter Layman once bottle-fed as a baby, before the dog morphed into a 123 pounds ball of fur.

Mostly behaved Deebo had a moment when he lost his poise as he started to take a lap out of the dish of water Wallace had for the blessing.

While waiting her turn Sheila Tackett did bottle-feed a 3-week-old tabby kitten she called Angel who had lost her mother. Sucking on a plastic bottle longer than itself, the kitten steadily nursed, undisturbed by anything, including a nuzzle from two of the Great Danes.

Joining in the event was Help For Animals, the Barboursville, W.Va.,-based educational animal rescue center that also offers discount spay and neutering operations.

During the past 11 years the clinic has spayed or neutered 93,000 dogs and cats.

“And a few rabbits, “ Vicki Black of the organization, said. “We also have a program where we go into the schools to teach elementary students how to be kind to animals.”

The group also has a cat adoption room and finds foster homes for dogs.

“We focus on the cat that hangs around the parking lot and is starving to death,” Black said. “To help the cat who has had a litter under the garage and get her fixed.”

Before the service Jona Younce had to play an impromptu game of tug of war with her pair of 120-pound Bernese Mountain dogs. But it was worth the effort.

“This is just to show what a cool church we are,” Younce said.

Robert E. Lee telegraphed Jefferson Davis who was in his pew at St. Paul’s Episcopal Church in Richmond. His message... read more