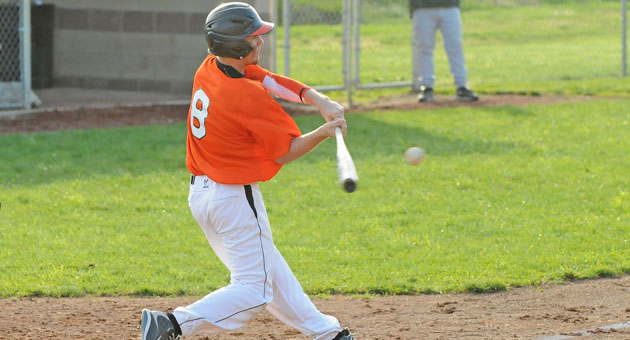 Ironton FIghting Tigers’ Steve Easterling (8) connects for a hit. Easterling had a 3-run triple in an 8-2 win over Coal Grove. (The Ironton Tribune / Tony Shotsky of Southern Ohio Sports Photos)

Ironton had just two hits but made both of them count as they beat the East Carter Raiders 4-3 on Saturday in their second game of a tri-series with Coal Grove.

“We didn’t have a lot of hits, but we took advantage of our scoring opportunities and Easterling pitched a good game,” said Ironton coach Tobey Schreck.

Steve Easterling struck out six, walked three and none of the runs he allowed were earned.

East Carter used a triple by Conner Robinson and an error to take a 1-0 lead in the top of the first, but Ironton scored two in the bottom of the inning.

Easterling doubled and Derek Battise and Brandon Leach walked. Sean Lawless was safe on an error for a run and Maurice Phillips walked to force in a run.

The lead went to 4-1 in the fourth inning.

Corey Kellogg singled, Trevor Easterling had a sacrifice, Trey Spencer walked and Steve Easterling was safe on an error as two runs scored.

The Raiders got another unearned run in the fifth but Easterling shut them down the rest of the game.

In the first game, Ironton parlayed six hits and six walks into an 8-2 win over the Coal Grove Hornets.

Battise got the win as he struck out seven, walked one, gave up just four hits and neither run was earned.

A single by Jake Jewell and a double by Austin Gumbert gave Coal Grove a 1-0 lead in the top of second inning, but Ironton came back with five runs in the bottom of the inning.

Three more runs scored in the fifth inning and it was 8-1.

Kellogg, Steve Easterling and Leach all walked and Lawless — who went 2-3 — doubled to clear the bases.

The Hornets managed a run in the sixth when Cody Pennington singled and Jacob Pierce reached on an error.

NEW ORLEANS (AP) — One of the coolest things in a college basketball player’s career is to be introduced in... read more