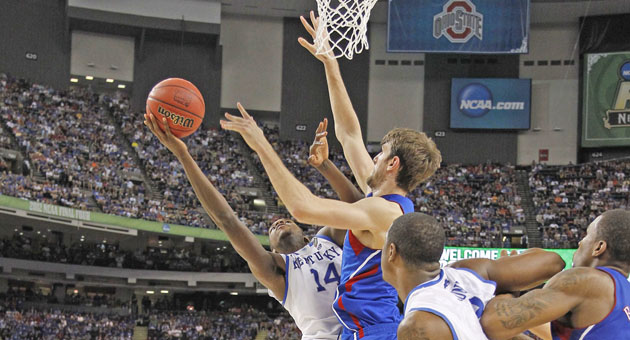 Michael Kidd-Gilchrist (14) of Kentucky puts up a shot in the second half against Kansas in the NCAA Tournament finals at the Mercedes-Benz Superdome on Monday in New Orleans, Louisiana. Kentucky beat Kansas to win the national championship. (The Ironton Tribune / MCT Direct Photos)

NEW ORLEANS (AP) — There’s so much more to Kentucky than Anthony Davis.

These were the collaborative ‘Cats, and that’s what made them so tough to beat.

Davis’ supporting cast made the most of their turns in the spotlight Monday night, picking up the scoring slack for their freshman star and overwhelming Kansas for a 67-59 victory in the NCAA title game that gave the Wildcats their eighth national title.

“No one cared who got the accolades,” forward Terrence Jones said. “The main goal was getting to this point and winning. That’s what we focused on.”

Michael Kidd-Gilchrist set the tone a minute in, staying in the game after a hard foul that looked as if it might have dislocated his shoulder, and Marquis Teague and Doron Lamb hit clutch shots that held back a late rally by the Jayhawks.

“That’s why we came here, to finally get it done,” forward Kyle Wiltjer said. “We are all just super excited.”

Jones and Darius Miller also made their marks in just the type of team effort the Wildcats (38-2) had given all season after Kentucky averaged six players in double figures for most of the season.

The Wildcats’ other NBA prospects handled things on the offensive end while Davis went 1 for 10 from the field. The AP player of the year remained his dominant self in every other phase of the game with 16 rebounds, six blocks and five assists.

Lamb, who finished with 22 points, said his only goal when he returned for a second year at Kentucky was to win a national championship.

“He really carried us,” Wiltjer said of Lamb. “He made some big shots down the stretch and our depth really helped us tonight because no one really knows who’s going to step up and he stepped up tonight.”

After Kansas (32-7) cut it to 10 midway through the second half, Lamb squared up and hit a pair of 3-pointers in a 23-second span to snap the ‘Cats back after they’d been 3 of 14 from the field with six turnovers to start the second half.

He finished shooting 7 of 12 from the field.

Then it was Teague’s turn.

The point guard was considered the key to keeping the Wildcats playing together and followed in the shoes of John Calipari’s prodigies such as John Wall, Brandon Knight, Derrick Rose and Tyreke Evans. He finished with 14 points, three assists and two turnovers, making his biggest impact late.

With Kansas closing, Teague buried a 3-pointer from the top of the key with 2:50 left that pushed the lead back to double digits, then hit two free throws inside a minute that helped seal the victory and finish Kentucky’s eighth title run.

Kidd-Gilchrist, who had 11 points and six rebounds, careened hard into the court after being fouled by Elijah Johnson just over a minute into the game. He stayed down for a few tense moments, then got up, got to the line and made his first free throw even though his right shoulder was clearly bothering him.

“We don’t stop here,” Kidd-Gilchrist said. “I want to be great.”

Jones, who had nine points and seven rebounds, also had an injury scare when he crumpled to the court in the first half, appearing to badly roll his right ankle. He got up with a limp but stared at the bench with a look that said there was no way he was coming out of this game.

He was still hobbling at the half, but never asked out because this was the game he wanted to play in when he surprised many by returning for his sophomore year.

“Having that meeting with coach,” Jones said, “trying to come back and win, getting myself better, rewarding myself and my whole team with having a successful season is just a great way to finish.”

The Wildcats never had a more serious injury this season than when Jones missed two games in December with a dislocated left pinkie.

Miller, the senior leader, set a school record with his 152nd appearance early in the first half, and then quietly provided five points and six rebounds in 25 productive minutes.

“I can’t really explain it or put it into words. All the hard work that we put in this year, the sacrifices that people have made on this team means a lot,” Miller said. “We’ve grown as brothers. We’ve had a lot of fun with this.”