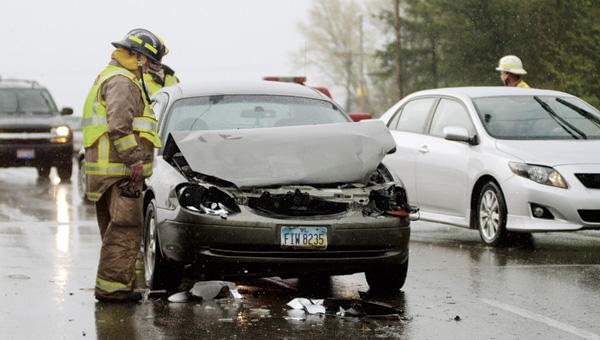 Scott Cunningham with the Ironton Fire Department, surveys the damage following a multi-vehicle accident Wednesday afternoon on State Route 93 across from the Hills Shopping Plaza.

The weather is being blamed for a minor accident just after 3 p.m. Monday on State Route 93 at the U.S. 52 entrance and exit ramps.

State Highway Patrol Trooper Keith Kobi said a 16-year-old Kitts Hill driver was cited for failure to maintain assured clear distance when his 2003 Ford Taurus collided with the back of a camper pulled by a truck that was driven by Mark Lynch, of Ironton.

Kobi did not give the Taurus driver’s name. Kobi said the 16-year-old blamed his failure to stop on the wet pavement.

Mark Lynch said he and his wife, Ginny, were on State Route 93 headed south toward town when they stopped for a fender bender in front of them when their camper was struck from behind.

“They bumped a little and pulled over to the side and when I stopped (for them) I got rear-ended,” Lynch explained. Neither he nor his wife were injured. The 16-year-old was not hurt either. Kobi said he was not aware of the two cars Lynch spoke of that caused him to stop.

“They were gone when I got there,” Kobi said.

Coal Grove police were busy with an accident at the foot of the Ironton-Russell Bridge during the 5 p.m. rush hour. Patrolman Jacob Emnett said the accident was a fender bender and referred questions to Chief Eric Spurlock.

BURLINGTON — A project to restore a piece of Burlington history has gotten a boost from an eastern... read more