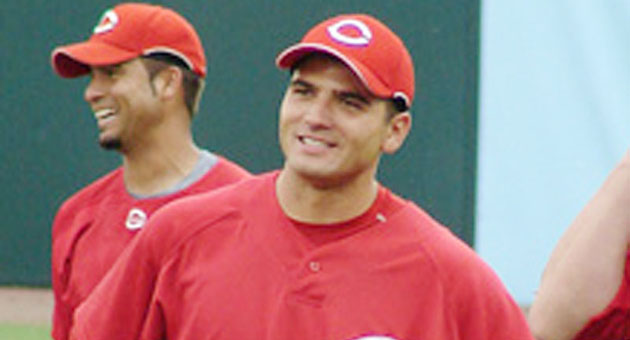 CINCINNATI (AP) — Joey Votto got a big payday by staying in a small market, agreeing to a $251.5 million, 12-year deal with the Cincinnati Reds on Wednesday that is the longest guaranteed contract in major league history.

The agreement adds $225 million over 10 years to his previous contract. The deal includes a club option for 2024, when the 2010 National League MVP turns 41.

After watching NL Central rivals St. Louis and Milwaukee lose their first basemen to bigger markets, the Reds secured Votto with a package that easily eclipsed Ken Griffey Jr.’s $116.5 million, nine-year deal from 2000 as the largest in franchise history. In the majors, it trails only Alex Rodriguez’s $275 million and $252 million deals, both over 10 years.

“Is it risky?” said owner Bob Castellini, who sought a lot of outside advice before signing off on the deal. “No doubt. That’s the environment we live in, especially as a small market. We feel Joe will be a cornerstone.”

It wasn’t an easy decision for the 28-year-old Votto to make such a long-term commitment. He decided he had found contentment in Cincinnati, which took him in the second round of the 2002 amateur draft.

“Maybe I could have found that elsewhere,” Votto said. “Maybe not. But I like what I’ve got here.”

Under Castellini, the Reds have been trying to rebuild the franchise into a regular winner by developing players and holding onto them. Six of their nine starters on opening day have come through the farm system.

Keeping Votto rather than letting him leave for a bigger market was considered a key.

“It’s hard to compete with the bigger markets,” manager Dusty Baker said before a workout at Great American Ball Park. “You see those guys who have left – they couldn’t come up with a deal – and they go to bigger markets like New York, L.A., Philadelphia, Chicago, Detroit, Anaheim.

“It means a lot not only for the franchise but also for the city. It means kids can grow up emulating him and pretending to be Joey Votto.”

Albert Pujols helped St. Louis win the World Series, then got a $240 million, 10-year deal from the Angels in December. Prince Fielder led Milwaukee to the division title, but left for a $214 million, nine-year contract with the Tigers.

The Reds have been trying to lock up the young core of their team for the past few years. Outfielder Jay Bruce received a six-year, $51 million deal after the 2010 season, when Cincinnati won the division but got swept in the playoffs by Philadelphia.

Votto was offered a long-term deal then as well, but chose a $38 million, three-year contract instead. He said he’s more willing to make a long-term commitment now, and joked his girlfriend probably was happy about that, too.

Votto’s contract tops the 11 seasons Colorado gave Todd Helton in 2001, a deal that guaranteed him $151.45 million.

It’s an aggressive move for a small market franchise. Castellini said Votto’s deal won’t handcuff the franchise in keeping other players or Baker, who is entering the final year on his deal.

“What we’re doing will not be to the financial detriment to the makeup of our team in the future,” he said.

The Reds essentially kept their roster intact after their 2010 championship season and slipped back to third place last year. They changed strategies in the past offseason, trading for starter Mat Latos and reliever Sean Marshall while remaking their bench.

Votto is the fulcrum of an offense that is one of the most productive in the NL, playing in one of its most homer-friendly ballparks. Votto batted .324 with 37 homers and 113 RBIs in 2010, and followed that by batting .309 with 29 homers, 103 RBIs and a career-high 40 doubles last year.

His contract eclipses the deal that Griffey got to return to his hometown team in a trade with Seattle in 2000 as the richest in club history. Griffey was the face of the franchise then, even though much of his time in Cincinnati was spent recovering from injuries.

“It means a lot to the city to have Joey as the face of the franchise,” Baker said. “He’s a very good role model for the task.”

Votto’s shy personality came across during a news conference broadcast live to announce the deal. He practiced reading a statement beforehand, but acknowledged that he was nervous. When he stumbled over a word, he joked, “There was a typo right there.”

Finally, he put the paper aside and talked about how he’d react to the deal.

Reds to open season against Marlins