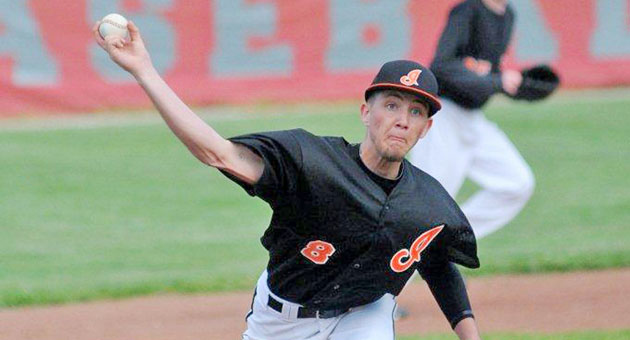 Ironton Fighting Tigers’ Steve Easterling fires a strike as he racks up one of his 13 strikeouts in an 11-1 win Thursday over Symmes Valley. (The Ironton Tribune / Kent Sanborn of Southern Ohio Sports Photos)

AID — Steve Easterling understands the old saying that the best pitch you can throw is a strike.

Easterling threw plenty of strikes as he struck out 13 and pitched a six-hitter to lead the Ironton Fighting Tigers to an 11-1 six-inning win over the Symmes Valley Vikings on Thursday.

“Their pitcher threw hard and did a nice job, but we started to hit him the second time through the lineup and they made a few errors that helped us.”

Derek Battise and Sean Lawless each went 2-3 as Ironton (5-2) collected nine hits. Nick Heaberlin and Easterling were 1-2 while Korey Kellogg, Jacob Friend and Trey Spencer were 1-3.

With the game scoreless, Ironton blew the game open with eight runs in the fourth inning.

Easterling singled, Lawless was hit by a pitch and Battise singled in a run. Brandon Leach reached on an error for a run and Friend doubled in a run.

Maurice Phillips walked, Trevor Easterling was safe on an error, Kellogg walked, Easterling was hit by a pitch, Lawless singled in a run and Leach walked to force home a run.

A run scored in the fifth on a hit by Spencer, a balk and Kellogg’s base hit.

The lead went to 11-0 in the sixth on hits by Lawless and Battise, a walked to Cody Roberts and Spencer and a hit by Heaberlin.

The Vikings got their run in the sixth when Mays singled, stole second and third and Corn singled.

CINCINNATI (AP) — Joey Votto grabbed the cap off his head and tossed it into the joyous crowd behind the... read more