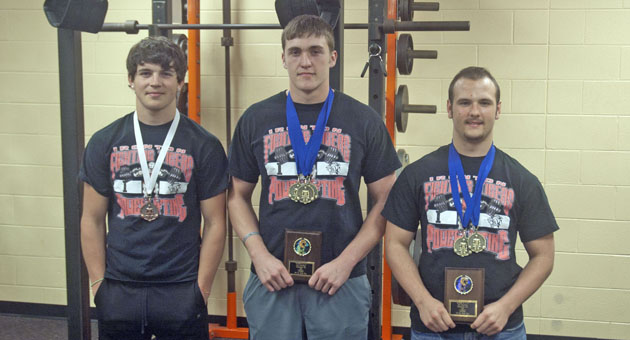 When it came time for the state powerlifting meet, three Ironton lifters made a statement.

Senior Tommy Saul and juniors Austin Rowe and Drew Wells put up some heavy numbers as they recorded two first-place finishes and a third-place at the state powerlifting meet held in Kenton.

Saul and Rowe each took first place in their weight class while Wells finished third among 40-plus lifters in each division.

All three boys won first-place at the Southeast regional meet held at Coal Grove. Saul set a regional record in the 225-pound class for total weight as he had a 325 bench, 610 squat and 585 dead lift.

“We won and that was our goal, but we felt we could have done more,” said Saul.

“We practice with 45-pound plates and they put 100-pound plates on the bars. They’re more concentrated in an area and that pulls you down and you have to adjust. We didn’t adjust like we should have.”

Wells didn’t lift in the regional meet last year, but he said Saul and Rowe got him interested this year.

“(Saul and Rowe) are my friends and I saw they were having fun with it,” said Wells. “I love lifting. I’ve done it since the sixth grade. I want to keep lifting. It’ll help me in football and track.”

Rowe was fifth in the regional meet last year and did not lift in the state meet. He said the experience was beneficial.

“Last year helped me learn what to do for the next year,” said Rowe. “It felt good. It’s a great accomplishment.”