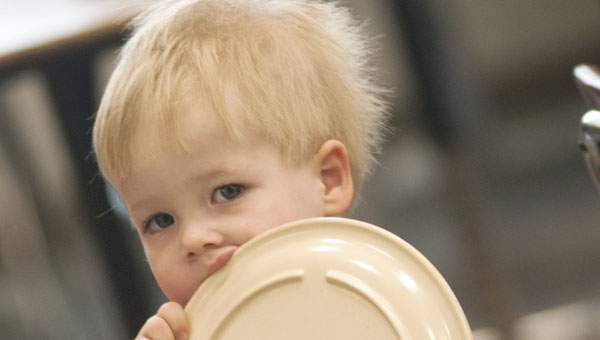 COAL GROVE — Seven-year-old Kelsey Clark and her brother, Tyler, 2, waited a moment while Tom Carey put the finishing touches on a pancake Saturday at the Dawson-Bryant High School cafetorium. Now, this wasn’t just any pancake the children were lining up for. These pancakes had ears.

“You see my Mickey Mouse pancakes,” Carey asked. He flipped the fluffy white bread over to reveal a face made with sausage. For a kid, what more could you ask for?

For adults, Saturday’s annual Harold Haney Pancake Day, sponsored by the Coal Grove Lion’s Club, provided breakfast and a chance for families and friends to reconnect.

“I do this every year,” Neomia White, of Coal Grove, said. “My husband (the late Wayne White) used to belong to the Lion’s Club. I still come for the good food and to see my friends.”

As the Lions Club members flipped those flapjacks and sizzled the sausage, members of Boy Scout Troop and Cub Scout Troop 103 helped patrons find a place to sit and kept the cups and glasses filled.

The pancake day is one of the club’s chief fundraisers throughout the year. The Lions Club is known internationally for its support of eyeglasses for the needy.

In the hallway outside the cafetorium, members of the high school prom committee waited in hopes those who had full tummies also had full pocket books. The committee had a rummage sale set up to raise funds for the prom.

“I try to keep the price low, but this year it’s $30,” prom adviser Kim Ritchie said. The prom is in three weeks and the committee has had several fundraisers to make this year’s event a nice one.

The $30 pays for the prom and an after-prom party at Spare Time. Ritchie said those who attend the after-prom party have a chance to win cash prizes throughout the night. At 4 a.m. when the prom ends, every child left is eligible to win $1,000 cash. The prom is April 28.

A Coal Grove man who did not report to his probation officer will now instead report to prison. William... read more