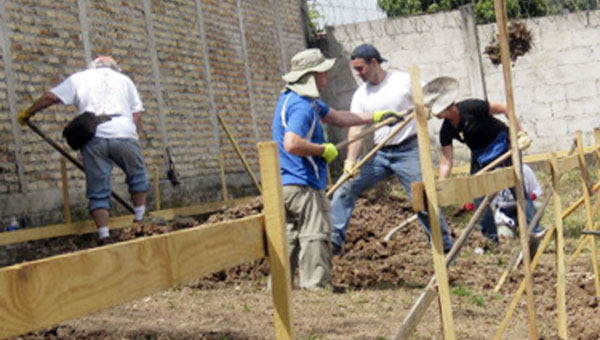 From the moment he stepped onto the tarmac at the airport at the foot of the central mountains of Honduras, Ironton businessman Robert Slagel entered a world of shocking contrasts.

“As soon as we got off the plane, there was a guard with a machine gun,” he said. “In the lobby of the airport, there were private individuals guarding luggage with machine guns.”

The Ironton entrepreneur was part of three-person team from Christ Episcopal Church going as first-time missionaries to the poverty-stricken Central American country of Honduras. Joining Slagel were Laurel Baise of Ironton and the Rev. Sallie Schisler, vicar of the church.

They left on a dreary, overcast Sunday, just before the start of Lent, the season of repentance and contemplation for Christians. Now as the culmination of that season dawns today on Easter Sunday, their journey shows the message of service to those in need that is the hallmark of their faith.

“To be honest, I never thought in a million years that I would go on a mission trip,” Slagel said.

However his sister, Kathy Nelson, was heading up a trip to Honduras for her church in Texas, Good Shepherd Episcopal.

As unnerving as it was to see armed guards everywhere, the splendor of the country captivated the trio.

“It is very beautiful,” Slagel said. “Very similar to Jamaica. Beautiful but financially destitute. Very poor. It is a shame. There are a couple of resorts along the coast. But the rest is very poor, lawless. Most folks police themselves. Every store we would pass from the hotel to the church had an armed guard in plainclothes out front with a shotgun.”

The mission trip was two-fold, to build bleachers for a soccer field by San Juan Apostal Church and to offer Bible school for the children of the community. With the completion of the soccer field, that area can be rented out to groups to provide income for the community.

“This was at the bishop’s direction,” Slagel said. “He said ‘I don’t want you giving these people anything. I don’t want them to become a generation of handouts.’ He wanted us to teach them how to fish, not give them fish. …to show them entrepreneurial skills. Had we just gone out and handed out dollar bills, it would have been a Band-Aid.”

Schisler was part of the Bible school where she worked with children from 2 years old to early teens.

“We would arrive at the site and have morning devotions,” she said. “Then we would go to work transforming the nave by turning pews around and put tables in. We had 10 tables where the children could work. Then we went to the front of the church to sing and hear Bible stories.”

One morning after the children had worked on crafts, she wanted them to join her at the front of the church for singing. A 7-year-old small boy kept working on his coloring until Schisler told him he could work on it at home.

“It made me feel a little embarrassed to make the assumption that the children would naturally have crayons,” Schisler said. “There are children who do not have the luxury of having crayons.”

Both Slagel and Schisler agree the experience was life-changing.

“It has given me a real appreciation of how wonderful things are in the United States,” Slagel said. “It has also made a little bit embarrassed by the things I get upset about and I look at what these people have to deal with every day. The most ironic thing is they are happier than we are.”