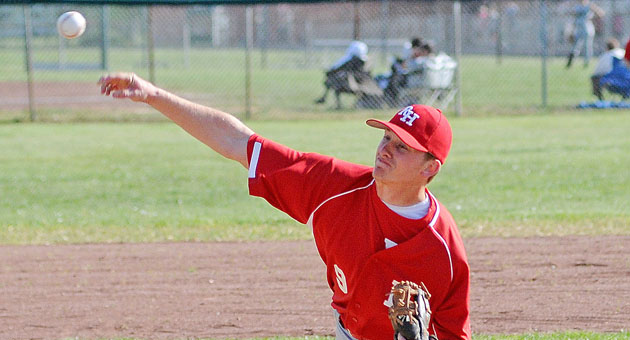 PROCTORVILLE — It was everything that was expected.

Rock Hill’s Drew Kidd out-dueled Fairland’s Alex Thackston as the Redmen blanked the Dragons 2-0 on Monday in a showdown for first place in the Ohio Valley Conference.

Kidd had a perfect game until Thackston doubled with two outs in the seventh inning but he struck out the next batter to end the game. It was the only ball the Dragons hit into the outfield.

Thackston threw equally as well for Fairland (5-3, 3-1). He struck out 12 and walked three as he allowed just two singles.

“Kidd threw well. We weren’t patient at the plate and we made some mistakes that hurt us and they didn’t make mistakes. They deserved to win,” said Fairland coach Bryan Ward.

Rock Hill (7-3, 4-0) got a run in the third inning when Jonah Cox walked, moved to second on a bad pickoff throw, was balked to third and scored on a squeeze bunt by Jared Bruce.

The second run came home in the fifth. Evan Morris singled, Cox put down a sacrifice bunt and Morris came home on a throwing error.

“We were able to put the ball in play and scratch out a couple of runs against a very good pitcher,” said Litteral.

By JIM WALKER Tribune Sports Editor   PROCTORVILLE — Pitching and defense will do it every time. Chandler Fulks pitched... read more