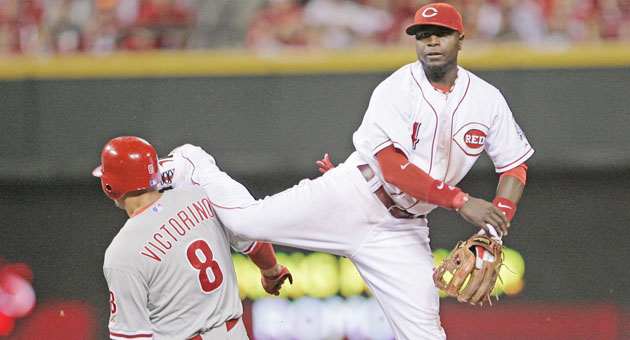 CINCINNATI — All-Star second baseman Brandon Phillips agreed Tuesday to a $72.5 million, six-year contract with the Cincinnati Reds, the second big-dollar deal in a week for the small-market club.

The Reds reached a deal with their three-time Gold Glove second baseman five days after former NL MVP Joey Votto — their Gold Glove first baseman — agreed to a deal through 2023 adding $225 million over 10 seasons. General manager Walt Jocketty thinks the signings can make the Reds a winner for years.

“This is another step in that direction,” Jocketty said. “To get two players of the caliber we have, two premier players like Joey and Brandon, I think is remarkable. It took a while, but we finally got this done.”

The Reds have gone on a spending spree to try to turn themselves into an annual contender. They gave right fielder Jay Bruce a $51 million, six-year deal deal after the 2010 season, when the Reds won the NL Central and got swept by Philadelphia in the playoffs.

Since then, they’ve given left-hander Aroldis Chapman a $20.25 million, six-year contract, Johnny Cueto a $27 million, four-year deal, and left-hander Sean Marshall a $16.5 million, three-year agreement. Phillips’ contract is the last major one for a while.

“I don’t anticipate continuing to have all these huge contracts,” owner Bob Castellini said.

Phillips blossomed in Cincinnati, which got him from Cleveland for right-hander Jeff Stevens at the start of the 2006 season. Phillips made it clear he wanted to stay in Cincinnati and began negotiating a new deal last season.

Jocketty said the main stumbling block was the length of the deal — the club was offering four more years, but Phillips wanted five.

When the club gave in, the deal was struck. Phillips would become the first 36-year-old second baseman to make $12 million or more.

“That’s what we did — we went another year on the contract,” Jocketty said. “We were able to get a deal done quickly after that.”

Phillips said he was trying to keep from crying at the news conference to announce the deal, which he talked over with his mother the previous night before making a decision. He said he had implored his agents to find a way to keep him in Cincinnati.

“I cried about this,” Phillips said. “This is where I wanted to be.”

Phillips is one of the team’s most popular players. His following grew quickly after he started a Twitter account last year, regularly engaging fans. He’s also a regular on the team’s annual winter caravan bus trips to outlying cities, staying to sign autographs for as long as needed.

“Brandon is one of the great second basemen in baseball,” Castellini said. “He’s also fantastic off the field, represents this franchise with a big smile all the time. He really relates to the fans, and vice-versa.”

CINCINNATI (AP) — They lead the majors in homers. Their starting rotation is one of the NL’s best. So far,... read more