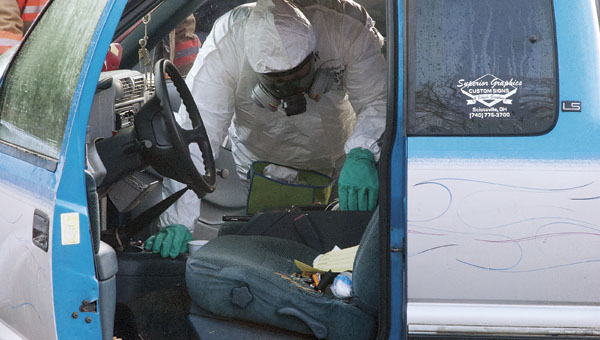 A Portsmouth man will spend the next eight years in prison for his involvement in a mobile meth lab,

The officer said he noticed things about the vehicle he thought were suspicious. A search of the truck allegedly confirmed the officer’s suspicions and the four men were arrested.

• Roger Meadows, 34, of 3826 Stanton Ave., New Boston, pleaded guilty to third-degree having a weapon while under a disability.

A second count of improper discharge of firearms into a habitation or school safety zone was dismissed in agreement for the guilty plea, said Assistant Prosecuting Attorney Jeff Smith.

“I’m sorry to waste your time,” Meadows said before sentencing.

Judge Charles Cooper sentenced Meadows to three years in prison and ordered him to pay his court costs.

• Bobby B. Effingham, 40, of 403 Fourth St. East, Apt. 19, South Point, was arraigned on one count of failure to comply with order or signal of a police officer.

Effingham pleaded not guilty though his attorney J.T. Holt.

Cooper schedule a trial for April 18.

State wants village to pay up