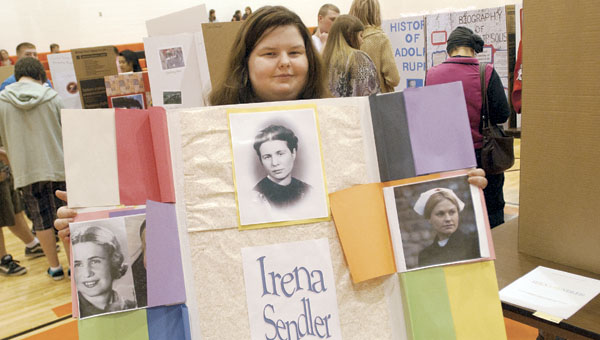 Kenzie Ackerson wasn’t even born when four shaggy-haired lads from Liverpool burst onto the music scene in the 1960s. But she has become an expert on the subject nonetheless.

The Beatles was the subject of her social studies exhibit Thursday, part of the third annual Ironton High School Social Studies Expo.

“I thought it would be a fun thing to do,” Ackerson said. Besides being fun, she learned something, too. “I didn’t know they influenced people so much,” she said.

And that was the point of the expo, history teacher Mary Near explained. The goal was to expand the students’ knowledge of history, social studies and the world around them with a hands-on project that took them beyond the classroom.

“How Could World War II Have Been Prevented?” Zac Estep’s exhibit asked.

“After the Holocaust she tried to reunite them with their parents, if they (the parents) were still alive,” Dalton said. “Or they were adopted out.” Sendler also worked with a group that changed the names of Jewish children to make them sound “Gentile,” with the hopes of keeping the children from being rounded up with adult Jews and sent to concentration camps. What impressed Dalton the most about her subject?

“That she would risk her own life to kidnap children to save them from the Nazis,” Dalton replied.

Ashley Jones’ exhibit was on Dr. Seuss. Her exhibit was not only a three-sided poster board but also a laptop that played the movie “Horton Hears A Who.”

Jodi Clay presented an exhibit on John Philip Sousa, who composed many classics such as “Stars And Stripes Forever.”

Alexis Cooper’s exhibit was on Jack The Ripper. Cooper confessed her mother had a bit of influence on this choice.

“I didn’t have a topic picked and we were at the movies. We were watching a scary movie and she brought it up,” Cooper explained. Until then, Cooper had only a vague idea who this person was. “I just knew he was a serial killer,” she said. And does she have an idea who the infamous slayer of women was? “I honestly don’t think it was any of the suspects,” she said.

“I like the variety of the projects and the work they put into them.” Near said, surveying the room full of exhibits. Other teachers agreed.

“A lot of times you hear negative comments about high school students and Ironton’s in particular,” teacher Doug Graham said. “But we have a lot of good students who have done good, quality work.”

Relocating the combined 911 dispatchers to the Emergency Operations Center room at the 911’s headquarters at Park Avenue appears... read more