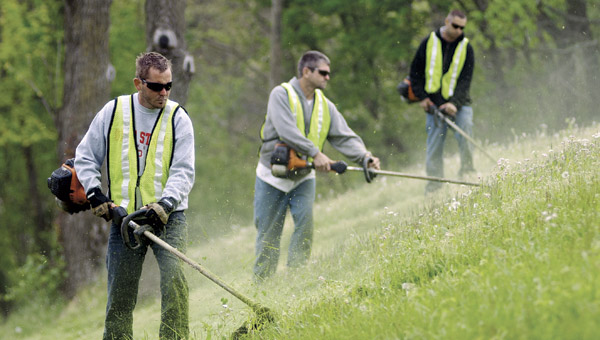 ames Baker, David Large and Stephen Labor, pictured left to right, work on the hillsides at the intersection of U.S. 52 and State Route 93 Saturday as part of the Great Ohio State Roadway Cleanup.

A man carrying a white trash bag with garbage showed up a few weeks ago to talk to the Ironton City Council.

Mark Hudson decried the state of Ironton roadways and how much trash he had picked up along Park Avenue at the city limits.

Mayor Rich Blankenship had a ready solution to Hudson’s concern about the trash.

“We’ve got two cleanups coming up,” the mayor told him. “And we love volunteers.”

Throughout Lawrence County in the coming months, a number of cleanup events will give Lawrence Countians a chance to make their part of the county cleaner and greener.

A few dozen volunteers Saturday met at the Etna Street Park for a brief organizational talk before going to U.S. 52 and some of the city parks to tackle litter. Saturday was the Great Ohio State Roadway Cleanup, sponsored by the Ohio Department of Transportation and Keep Ohio Beautiful. Also taking part was Ironton Municipal Court Judge O. Clark Collins, who brought his community service workers and staff.

“This is a worthwhile event, but it is unfortunate we have to do this,” Mayor Rich Blankenship said. “But it is good to see that people are taking part (in the event). And of course our main goal is to educate people to stop littering.”

Some townships and villages offer their own individual cleanup events throughout the year and in some cases, this is in addition to participation in the county-wide cleanup in May.

Fayette Township’s beautification efforts actually started several years ago and was known then as the Burlington Community Cleanup. With a lot of hard work, it blossomed and grew into a twice-a-year event: April 27-28 and the third weekend in October. And, trustee Mike Finley pointed out, all of it is free to Fayette residents.

During the cleanups, volunteers will pick up trash from roadsides and ditches. Dumpsters will be available at the Burlington Fire Station for those who choose to dispose of their trash the right way. For the sick and elderly, trustees and other volunteers will make a house call to pick up that unwanted sofa or other large item.

Windsor Township offers its cleanup in the fall. Residents may bring unwanted items to the township hall and it will be carted away. Trustee Mark Johnson said in the four years the cleanup event has been offered, it has grown.

“It gets better every year,” Johnson said. “And it’s a good deal.

Finley praised Lawrence County Municipal Judge Donald Capper for being quick to punish litterbugs and illegal dumpers when they’re caught. He also praised Lawrence-Scioto Solid Waste Management District Director Dan Palmer for his dedication to his job and his willingness to help townships get grants to pay for the cost of cleanups. Fayette Township has gotten scrap tire grants in the past — tire dumping is one of Fayette’s biggest problems.

“Dan Palmer is the best thing to happen to the county in a long time,” Finley said. “He puts his heart and soul in it.”

Those who want to participate in a village or township event should call the governmental office of that entity and inquire when a cleanup is scheduled.

Perhaps the granddaddy of all the local cleanups is the Lawrence County–Wide Cleanup Day May 5.

It is sponsored by the solid waste management district and this year will involve 55 groups and more than 1,100 volunteers who will fan out to every corner of the county and pickup trash, old tires and a little of everything else from roadsides, creek banks and ditches.

“I’m very encouraged to see this many townships on board,” Palmer said.

Palmer pointed out that in the six years his office has sponsored the county-wide cleanup day, it has grown exponentially.

“We have all three South Point schools involved this year,” Palmer said. “And there are groups still coming on board.”

Palmer said, this year, all the churches on Greasy Ridge have agreed to clean a part of that roadway. Working together those churches have pledged to clean the entire roadway by day’s end.

Palmer is asking all groups to submit photos of their participation by the following Monday, May 7, along with the results of their work.

All volunteers for the cleanup who want to work in the city of Ironton will meet at the new farmer’s market on Second Street between Vernon Street and Park Avenue.

The Wayne National Forest is taking part and Palmer said several scouting groups have agreed to tidy up parts of the forest.

Palmer said any other scouting groups that want to take part in the forest cleanup should call Assistant District Ranger Chad Fitton at the Ironton Ranger District office.

Perhaps the oldest of the community cleanups is River Sweep.

Organized each year by the Ohio River Valley Water Sanitation Commission (ORSANCO), more than 21,000 volunteers from the six states that border the river will meet at 9 a.m. Saturday, June 16 to clean trash from more than 1,900 miles of shoreline.

The River Sweep Lawrence County Coordinator is Stephanie Helms, who is also the education coordinator for the solid waste management district. The three cleanup sites are the Ironton, South Point and Indian Guyan boat ramps. Helms can be reached at 532-1231.

Concentration difficult during times of grief

“I feel like I am losing my mind!” These words greeted me as I entered the home of a church... read more