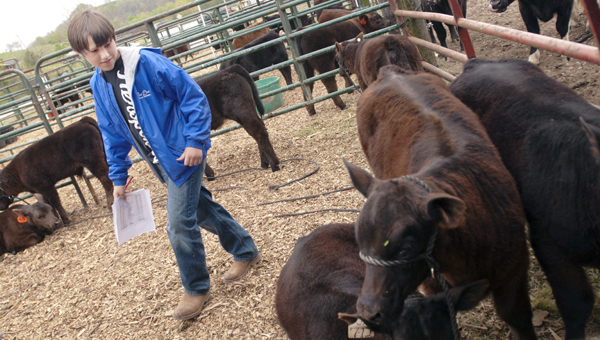 Jordan Johnson, of Gallia County, browses through the selection of calves during the sale Saturday afternoon.

WATERLOO — Jordan Johnson, of Gallia County, watched the calves as they strutted in their pens Saturday, trying to find just the right calf to buy as a 4-H project.

And there were plenty of calves to watch. Seven Lawrence County cattle farms last weekend came together for the first-ever Spring Fling Sale at the Payne Family Farm in Waterloo.

“This was a collaborative effort,” co-organizer Joe Ferguson said. “It’s made up of a lot of families that have been in 4-H for years. We got together because we feel like agriculture in Lawrence County is as good as anywhere. We want to come together and show that.”

Ferguson said sometimes 4-H participants travel out of the area to find a calf to raise and show at the Lawrence County Fair thinking those calves are somehow better. He hopes this sale and more like it in the future will keep Lawrence County youth and other cattle buyers at home and attract buyers from other areas, too.

“We had a buyer from West Virginia this morning,” Ferguson said.

Many of the animals were featured on a website www.springflingsale.com, which is where Jordan became acquainted with the calves.

“He had been printing off ads from the net and he’d say, ‘look,’” Jordan’s mother, Amy Johnson said.

As the Johnsons got a good look at the cattle, local farmers like Gene Myers watched the visitors and chatted with their neighbors.

“We’re getting to see our neighbors,” Myers said. “I think this is a good community effort.”

Payne, who hosted the event, said he hoped this event would make people more aware of what Lawrence County has to offer.

Does Ironton have an ordinance that requires residents to put their bags of trash in trash cans? Vickie Browning, of... read more