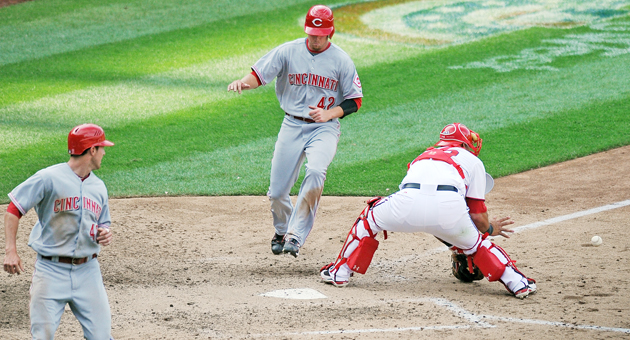 WASHINGTON (AP) — Joey Votto ensured the weekend in Washington wasn’t a total loss for the Reds.

Votto hit a two-run double in the 11th inning Sunday and the Reds avoided a four-game sweep with an 8-5 victory over the Nationals on Sunday.

The Reds, who had scored just 10 runs in losing five of six, scored their most runs in a game this season.

Ryan Ludwick hit a grand slam in the first and Cincinnati led 5-0 in the fourth.

But Washington scored three in the bottom of the fourth and another run in the fifth before tying it on Ian Desmond’s RBI single in the seventh.

“You hate a sweep, especially a four-game sweep, and they were threatening to knock on the door,” Reds manager Dusty Baker said. “We got out of here with one.”

In the 11th, Drew Stubbs, who had been 1 for 15 in the series, singled off Tyler Clippard (1-1) to open the inning. After Wilson Valdez tried unsuccessfully to bunt, Zack Cozart singled — his third of the game — and Votto, who was walked intentionally his previous two at-bats, doubled to left on a 2-0 count. Scott Rolen followed with an RBI single.

“Finally, they couldn’t walk Joey. We had some runners on base. That was big,” Baker said.

Votto was 1 for 4 in his previous appearances against Clippard.

“Tyler’s a really difficult guy to face. I don’t think I’ve had a very good track record against him and I don’t particularly like facing him,” Votto said.

Jose Arrendondo (1-0), the fourth Cincinnati pitcher, threw a scoreless 10th. Sean Marshall worked the 11th for his first save of the season.

“Ludwick’s first home run as a Red, Marshall’s first save as a Red, and a lot of firsts today. Hopefully we can have some seconds, thirds, fifteens, twenties and on down the line,” Baker said.

Washington, which had won five straight, is 7-3.

Manager Davey Johnson revealed that Clippard has had shoulder discomfort, but said he was fine to pitch on Sunday. Clippard said there was nothing wrong with him.

The Reds took a 4-0 lead in the first. Cozart singled with one out, and after Votto was called out on strikes, Rolen bounced a ball to shortstop. Desmond’s throw to first pulled Adam LaRoche off the bag, and Desmond was charged with an error, though television replays appeared to show Rolen was out.

Jay Bruce walked and, on a 2-2 pitch, Ludwick launched a grand slam to left-center off Ross Detwiler. Detwiler threw 38 pitches in the first.

In the Reds’ first nine games, they were batting just .191, and hadn’t scored more than two runs in an inning.

Cincinnati scored its fifth run in the fourth on Ryan Hanigan’s RBI single.

Washington got its first hits off Reds starter Mike Leake in the fourth. Desmond and Danny Espinosa began the inning with singles. Ryan Zimmerman walked to load the bases, and LaRoche hit a two-run single. Bruce, in right field, bobbled the ball, and the runners moved up. Zimmerman scored on Mark DeRosa’s infield out to make it 5-3.

With one out in the fifth, pinch-hitter Roger Bernadina walked and scored on Desmond’s double and Cincinnati led 5-4.

The Nationals tied it in the seventh when Rick Ankiel led off with a double. With one out, Baker lifted Leake for Logan Ondrusek, who allowed a two-out RBI single to Desmond — his third of the game.

NOTES: Reds 2B Brandon Phillips started for the first time in six games. He’d been out with a left hamstring injury, but appeared to aggravate the injury when he doubled leading off the ninth. He was immediately replaced. “When you have a pulled hamstring and youre a squat-down, legs-type hitter like Brandon, youre putting pressure on your legs playing second base and then when he took that one swing and I was like, Oh, no, I hope hes not hurt again,” Baker said. … Cincinnati 3B Miguel Cairo missed the game with a strained left hamstring. Baker said he’ll be reevaluated on Tuesday. … Washington RHP Craig Stammen pitched four innings in three games this series and struck out nine. … Cincinnati is off on Monday and opens a three-game series in St. Louis on Tuesday. RHP Johnny Cueto (1-0, 2.25) is scheduled to pitch against RHP Kyle Lohse (2-0, 1.35). … The Nationals open a four-game series with Houston on Monday. RHP Stephen Strasburg (1-0, 0.69) faces RHP Kyle Weiland (0-1, 7.20).