Riding his way back 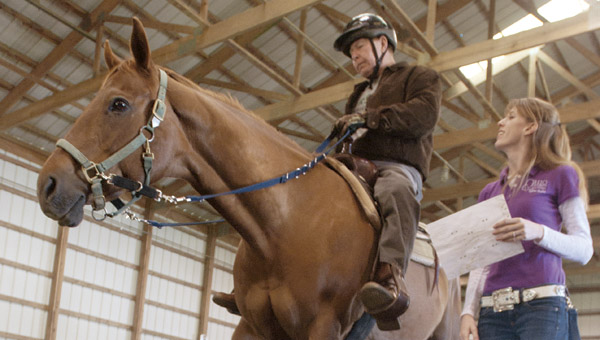 FRANKLIN FURNACE — Nellie Scarberry doesn’t take her eyes off her husband, Michael, as he holds a tight outside rein on Lester, a 20-year-old quarter horse.

As he takes the sorrel gelding at a walk through a maze of cones set up on the sawdust covered arena floor at the Ohio Horse Park, Michael’s face is a study of intensity.

“He’s tall in the saddle,” the Chesapeake resident said. “You know then he is having a good time.”

It’s those nonverbal cues that Nellie holds onto as she works to understand what her husband of 20 years is thinking. That’s because on Dec. 7, 2009, Michael suffered three strokes in rapid succession within seven days. The road back has been hard, frustrating and filled with tedious repetition of exercises to bring the strength back to Michael’s paralyzed right side.

“This is someone who was very independent,” Nellie said. “Then from one day to the next, it is gone. He would look so sad that he can’t talk, can’t say ‘Hello’ or ‘How are you doing?’”

Now the 60-year-old walks with just a slight limp but until a few weeks ago only spoke in garbled sounds that even his wife couldn’t always interpret.

That’s where Lester comes in, part of the stable of gentle steeds in the therapeutic riding program at the horse park. It’s Lester’s rolling gait that Nellie is banking on to bring her husband’s speech back.

“The rhythm of riding stimulates the verbal center of the brain,” said Brent Sturm, recreation therapist at the Veterans Administration Medical Center in Huntington, W.Va. “(Researchers) have found out it is the motion of the riding and the feelings you get from it. It is research that has been out for years.”

However, that therapy had never been tried at the VA center on a stroke victim until Michael volunteered for the program.

“We just needed something to break through,” Sturm said. “Why not try it?”

Right now using the therapy is in the pilot stage at the VA but Sturm is looking for ways to fund the program so it could be used for veterans with post traumatic stress disorder or traumatic brain injuries.

“The horse park and myself have worked on numerous grants,” Sturm said.

Grants along with any donations would go for the upkeep of the horses used in the program.

Michael has ridden since December in weekly sessions that last an hour. Already Nellie has seen a turnaround in her husband.

“He can say ‘Walk’ and ‘Whoa,’ she said. “He can even sing. One day he was riding and started singing ‘Oh give me a home where the buffalo roam.’ It’s amazing.”