Chesapeake track work to start in May 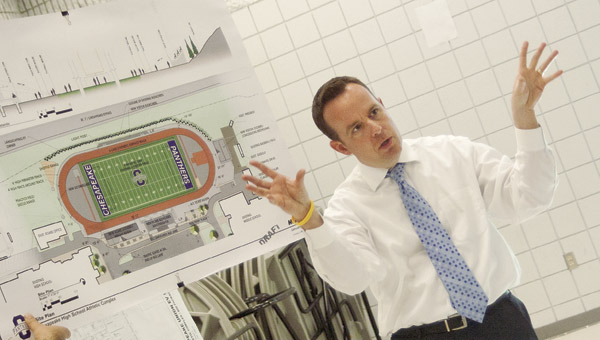 Bill Baker, with MSA Sport, goes into detail about future plans of the athletic complex Monday evening at the board of education meeting at Chesapeake Middle School.

What was once the Chesapeake football field resembles the craters on the moon as recent demolition has gouged the landscape.

But in another month the new vision of the athletic complex at Chesapeake Schools is expected to begin taking shape. But not without a half-million dollar jump in the price tag for the new addition to the middle school/high school campus.

That was the progress report architects from MSA Sport of Cincinnati gave at a community meeting Monday night to the school board. MSA Sport was chosen last year to be the architect for the complex beating out two other firms.

The proposal to build a new football and soccer field was originally estimated to come in at $3 million.

“That doesn’t look like it will happen,” Dr. Scott Howard, Chesapeake superintendent, told the board and audience at the meeting at the middle school.

Now the school board will consider extending the time frame for financing and reviewing alternative interest rates to meet that new cost, if that route is chosen.

“We will try to wrestle with a number of options to get it close to $3 million,” Bill Baker, lead architect on the project, said.

Funding part of the construction cost comes from moving 2 mills from the district’s 4.5 inside millage used for operating expenses to permanent improvements. That move has meant an additional $31.50 a year in taxes for those in the district on property with a market value of $100,000.

“We tried to get eight lanes and it just didn’t fit,” Baker said.

Also proposed is a ticket booth with entry gate featuring the district’s logo.

“That’s an alternative that we may not be able to include in the project,” Baker said. “It is a good donor opportunity.”

The second phase, which should go out to bid by the end of May, will include engineering design details such as electrical and plumbing work. Like the first phase, that is expected to hit $1.7 million mark.

“The technical design is adding to the cost,” Baker said. “Construction pricing is slowing on the up tick across the state.”

On top of the higher costs, Baker said he doubted the complex would be ready for the start of football season in the fall.

“If we have a nice dry summer, it is a possibility, but I’m not going to promise,” he said.

But the field could be available for one or two games at the end of the season, he said.

Now the athletic department’s contingency plan is for the football team to use fields at other schools during the upcoming season.

Nine to be laid off from IPD

Less than two months before Ironton was to stop its dispatching operation, Mayor Rich Blankenship has sent out layoff... read more