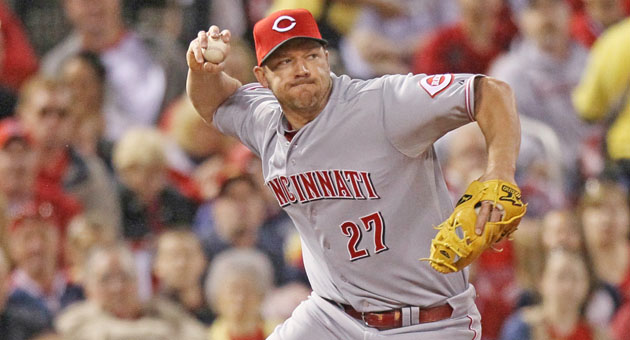 Cincinnati Reds third baseman Scott Rolen throws from his knees to retire the lead runner at second base on a fielder's choice by the St. Louis Cardinals' Matt Holliday in the third inning at Busch Stadium in St. Louis, Missouri, on Tuesday. St. Louis won, 2-1, in 10 innings. (The Ironton Tribune / MCT Direct Photos)

Cueto pitched seven innings, allowing seven hits and a run against the Cardinals, but it wasn’t enough for Cincinnati, which lost 2-1 in 10 innings to St. Louis on Tuesday.

The Reds fell to 4-7, when Matt Carpenter hit a bases-loaded sacrifice fly to drive in the winning run.

The Reds had their chances against St. Louis.

In the ninth, the Reds stranded a runner with two outs and wasted a leadoff single in the 10th.

The Reds’ best chance to do some damage came in the fourth off St. Louis starter Kyle Lohse. However, Lohse struck out the side after a walk and a single in the fourth inning.

“He made his pitches. He’s out there and he’s a competitor,” said Jay Bruce. “When he makes his pitches, and he knows exactly what he wants to do and able to do it, you see what happens.”

David Freese walked to lead off the 10th off Sam LeCure (0-1). Tyler Greene came in as a pinch-runner and advanced on a sacrifice by Yadier Molina. After an intentional walk, reliever Bill Bray entered and walked Daniel Descalso to load the bases.

Carpenter, who returned to the bench after playing the last four games for the injured Lance Berkman, pinch-hit and worked the count full before flying out to right field. Bruce’s throw home was unable to nab Greene.

“We were playing pretty shallow so I didn’t have a chance to get behind it,” Bruce said. “It was definitely hit hard enough to not give me a ton of time to get behind the ball. I did the best I could. He put a great at-bat out there.”

It was Carpenter’s 11 RBI of the season.

“It is a tough at-bat,” St. Louis manager Mike Matheny said. “Statistically he’s been pretty good against lefties his whole career, as short a career as it’s been. I liked our odds with him making something happen.”

Carlos Beltran gave the Cardinals a 1-0 lead when he hit a first-inning home run into the right-field bullpen.

Beltran, who also singled and walked, contributed a defensive gem in the third inning. He cut down Drew Stubbs trying to go first to third on a single with a one-hop throw to Freese from right field.

NOTES: It was the first extra-inning game of the season for St. Louis. Cincinnati is 1-3 this season in extra frames. … Lance Berkman returned to the St. Louis lineup after missing four games with a strained left calf and Freese was back after missing two games with a sore finger on his right hand. … St. Louis has homered in each of the four games with Cincinnati this season with a homer coming in the first inning in three of the games. … The Reds franchise remains two wins shy of 10,000 . … MLB announced the draft order for the June 4 first-year player draft Tuesday. Cincinnati will select 14th in the first round while St. Louis will draft 19th and 23rd. The 19th selection if compensation for the Los Angeles Angels signing Albert Pujols. The Cardinals have five of the first 59 draft selections. … Reds 3B Scott Rolen remains in 52nd place on the career doubles list, one behind Andre Dawson’s total of 503.

Buckeyes welcome back most of defense from 2011

By RUSTY MILLER AP Sports Writer   COLUMBUS — While everyone seems to be talking about Urban Meyer’s new hurry-up... read more