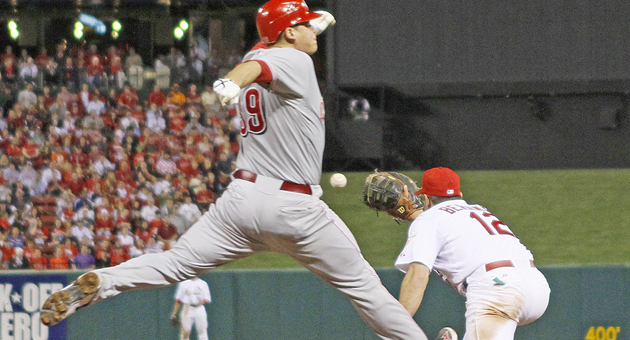 The Cincinnati Reds' Devin Mesoraco reaches safely ahead of the throw to St. Louis Cardinals first baseman Lance Berkman (12) on an RBI single in the fifth inning on Wednesday at Busch Stadium in St. Louis, Mo. The Cardinals eased to an 11-1 triumph. (The Ironton Tribune / MCT Direct Photo)

ST. LOUIS (AP) — The Cincinnati Reds acquired Mat Latos from San Diego in the offseason to shore up their starting pitching.

So far, Latos has struggled — and so has his team.

Latos went 5 2-3 innings for his longest stint of the year, but the St. Louis Cardinals roughed him up Wednesday night in an 11-1 romp over the Reds.

Latos (0-2) was touched for eight runs on nine hits while walking three and striking out six.

The Reds have dropped five of the first six games on their 10-game road trip and are already five games in back of the Cardinals in the NL Central. Devin Mesoraco drove in Cincinnati’s only run with an infield single in the fifth.

Reds manager Dusty Baker said he does not believe Latos, who has an 8.22 ERA, is feeling any pressure to live up to preseason expectations. Baker attributes most of Latos’ problems to missing his spots.

“I don’t think it’s mechanical as much as it is location,” Baker said. “The balls that have been hit hard are balls over the heart of the plate.”

There were plenty of hard-hit balls Wednesday, both while Latos was on the mound and after, as the Cardinals pounded out 14 hits.

“I knew they were going to be tough,” Latos said. “They’re a good-hitting ballclub.”

He found that out in the first two innings.

The Cardinals greeted Latos rudely as Rafael Furcal doubled down the line in right leading off the first and Carlos Beltran followed with a walk. Furcal later scored on Lance Berkman’s infield single and David Freese delivered a two-run double.

Beltran made it 5-0 when he homered with two out in the second. That was not an uncommon occurrence — Beltran had also homered off Latos in his two other official at-bats coming into Wednesday, though Latos did later retire Beltran for the first time in the fourth on a groundout.

After that, though, Latos settled down and held St. Louis scoreless for the next three innings.

“I just said the heck with it, I’m just going to go out there and throw and just reared back and threw and gave it everything I got,” Latos said. “I think the outcome was a little different.”

“A positive is that I found out what I haven’t been doing, I guess. More trusting my stuff and just letting it go,” he said.

Cardinals starter Jaime Garcia (2-0) allowed one run on seven hits and three walks. He was aided by four double plays and helped his cause with a triple off the wall in center field in the sixth that made it 7-1 and chased Latos.

“He got in some situations where he got a couple of walks and got behind guys,” St. Louis manager Mike Matheny said. “But he’s got the kind of stuff that he can turn it around quick and get strikeouts and get groundballs. He got some double plays that helped him out.”

The homer was Beltran’s fifth of the season and second of the series. Tyler Greene also had a two-run homer while Furcal had four hits and drove in two runs.

NOTES: Adam Wainwright, who has never started a season 0-2, will try to avoid a third consecutive defeat when he takes the ball for St. Louis on Thursday. … Of the eight position players that started for the Reds, only three were hitting better than .200 at the beginning of the night. … Berkman left the game in the fifth inning after aggravating a left calf injury. He acknowledged after the game that he could be headed to the disabled list. … Reds starters have not earned a victory since Johnny Cueto beat Miami 4-0 on opening day.