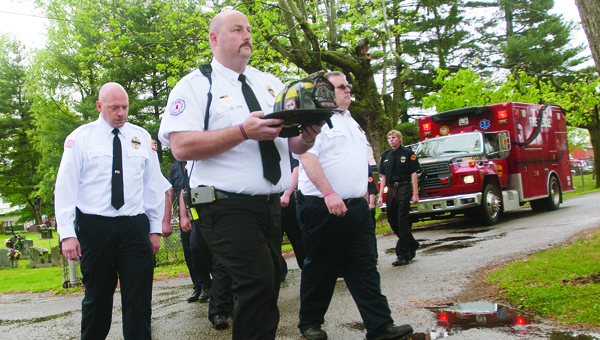 Area firefighters carry the helmet number 414 of the late Brian Sherman through Woodland Cemetery as they escort Sherman’s casket to its final resting place Saturday.

They stood three deep under the porte cochere of Tracy Brammer Funeral Home waiting for one of their own.

Wearing their dress uniforms and gold badges cut in half with the black band of mourning, the men and women of the county’s fire departments watched in silence Saturday morning. Nearby was a Coal Grove EMS van draped in bunting, a steady rain streaking the black tulle with silver droplets of water.

As the casket bearing the body of Coal Grove firefighter Brian Sherman was carried toward the van, now playing the role of hearse, they snapped to a final salute. Across the street the mournful notes of a bag pipe droned out its lament.

Then a cavalcade of fire trucks, EMS squads and law enforcement cars formed a cortege taking Sherman to Woodland Cemetery and his final place of rest.

A week ago today Sherman, 38, died unexpectedly. A lieutenant with the Coal Grove Volunteer Fire Department with more than 17 years Sherman was a 1993 graduate of Dawson-Bryant High School.

“Folks talk about the “brotherhood” in the fire service … there’s that special bond in the fire service that also stretches out to law enforcement and emergency services,” said Steve Rutherford, chief of the Rome Township Volunteer Fire Department. “Folks through out the county, nearly every fire department, has helped in some way and some how.”

After the viewing Friday, members from other fire departments helped clean the Coal Grove Station and their apparatus and draped it so it would be ready for Saturday.

Last year Rutherford served as president of the Lawrence County Fire Fighters Association. Sherman was his vice president. Rutherford said Sherman took his firefighting job to heart and followed in the family tradition. His father was the chief until he died, then Gary, Brian’s brother, became chief.

“There is a lot of family tradition at the Coal Grove department and Brian was extremely proud of that,” Rutherford said. “Helping other people was something Brian did daily.”

Rutherford said Sherman frequently helped with training exercises throughout the county, took the younger firefighters under his wing, mentoring them.

“He had a huge impact,” he said. “There is not a lot we can say to comfort the family, but we can show support, force in numbers. Show the family and the fire department that we’re there.”

Sherman worked with his brother Gary at Dow Chemical. Gary said it will be hard to go back to work.

“He always knew people,” Gary said. “We’d go to lunch and drive down Park Avenue and people would yell out, “Hey Sherm!”

There is a tribute video on YouTube called, “A Tribute to a Firefighter – Brian Sherman”

At a fundraiser at the Coal Grove Fire Department for Sherman memorial stickers, baked goods, and apple butter were sold.

On Monday L&J Dairy Bar on Marion Pike will donate 20 percent of their sales proceeds to Sherman’s family. On Wednesday Lenny’s Diner on 4216 State Route 93 will be donate 20 per cent of its sales to help with funeral expenses. There will also be a benefit for Sherman at Boomers in Ironton on Wednesday.

Having grown up in the village, Coal Grove Police Eric Spurlock said he had known Sherman since he was a child.

People thought he was intimidating because of his size, but Spurlock said he was just a big teddy bear.

“He was just a really good person and would do anything in the world for you,” Spurlock said.