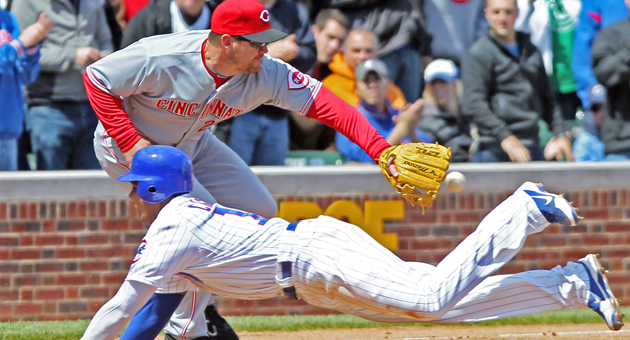 The Chicago Cubs' Starlin Castro slides safely into third base ahead of a throw to Cincinnati Reds third baseman Scott Rolen in the second inning at Wrigley Field in Chicago on Saturday. The Cubs defeated the Reds, 6-1. (The Ironton Tribune / MCT Direct Photos)

On Saturday, it was cold.

The Cincinnati Reds were shut down by Paul Maholm and managed just six hits in a 6-1 loss to the Chicago Cubs, who stopped a six-game slide.

Baker’s club scored one run for the seventh time this season and has managed only 12 runs in the team’s nine losses.

“It’s not like we didn’t have chances,” the manager said. “We had some chances to come back in that game. We could have pecked away and got a little closer.”

The Reds stranded 10 baserunners and went 2 for 10 with runners in scoring position, a stark contrast to the team that scored 15 runs over the previous two games — both wins.

“This is how spring goes sometime – hot one day and cold the next,” Baker said. “We didn’t come up with the big hits. That was the difference.”

Joey Votto and Brandon Phillips went a combined 1 for 7 for the Reds, who have lost six of nine. Mike Leake (0-2) allowed 10 hits and five runs in 5 2-3 innings.

Darwin Barney and Steve Clevenger each had three hits for the Cubs, who grabbed control with a four-run second inning. Starlin Castro had a double and a triple.

“I was just doing stupid sequences. I wasn’t mixing and matching enough,” Leake said. “They took advantage of me and I didn’t react quick enough.”

The 24-year-old right-hander pitched shutout ball after the rough start, but it was too late. He entered with a 4-1 record and a 2.66 ERA in seven career starts against the Cubs.

“Sometimes those innings will do it to you,” he said. “I’m happy that I came back and threw three more scoreless innings, just gotta minimize.”

Maholm (1-2) allowed one run and four hits in six innings, snapping a personal six-game losing streak. The left-hander struck out five and walked three in his first victory since July 10 for Pittsburgh against the Cubs.

“I was throwing my breaking ball for strikes today,” Maholm said. “I used all my pitches and the defense picked me up, and obviously the offense got rolling pretty quick.

“I had to make sure we had to keep that lead.”

One day after he learned he will not face charges over an alleged sexual assault, Castro tripled home a run in the second and doubled in the fifth. The 21-year-old shortstop also committed two errors to run his major league-worst total to seven.

Phillips singled in a run in the first, but Bryan LaHair hit a sacrifice fly in the bottom half and the Cubs added four more runs in the second.

Clevenger led off with a single to right and moved to second on a groundout. Joe Mather followed with an RBI double to left.

Mather advanced on Leake’s errant pickoff attempt and scored on David DeJesus’ single. Barney added a run-scoring double and came home on Castro’s first triple of the season to make it 5-1.

Clevenger added an RBI single in the seventh as the Cubs finished with a season-high 14 hits.

Clevenger, the backup catcher, is 10 for 17 on the season.

The Reds had runners on third and second with no outs in the seventh, but James Russell retired Stubbs, Votto and Phillips to get out of the inning.

NOTES: Reds OF Jay Bruce was given the day off against the lefty Maholm. . Baker said he expects Phillips (hamstring) to play Sunday and take another day off on Monday. . Cubs RHP Ryan Dempster was placed on the 15-day disabled list with a strained right quadriceps. OF Tony Campana was recalled from Triple-A Iowa, and Randy Wells will start in place of Dempster on Sunday. . Johnny Cueto (1-0, 1.89 ERA) will take the hill opposite Wells on Sunday in the rubber game.