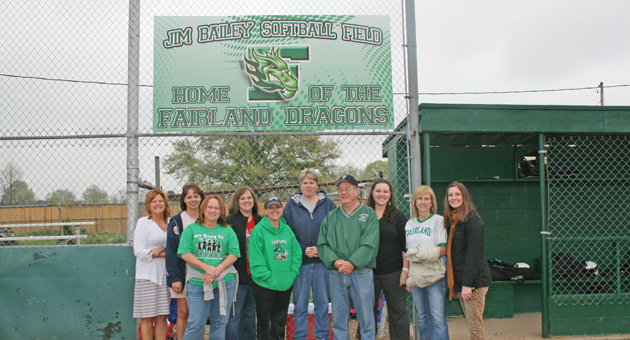 Former Fairland Lady Dragons’ softball coach Jim Bailey is surrounded by some of his former players during ceremonies naming the softball field in his honor. Bailey is the all-time winningest softball coach in school history. (Photos Courtesy of Renee Marshall)

PROCTORVILLE — During his 16 seasons as the Fairland Lady Dragons’ softball coach, Jim Bailey stamped his signature on the school’s program.

Now, the field on which he coached has permanently stamped his name on it.

Bailey – school’s most successful softball coach – was honored on March 31 when the girls’ softball field was named in his honor.

“It was a great honor. You feel humbled by it,” said Bailey. “You have to give credit to the people who helped you, the assistant coaches and, of course, the players.”

Bailey expressed his sincere thanks to Fairland superintendent Roni Hayes, the school board and former player Kathy Stalnaker who organized the dedication day events.

“Any coach knows he’s only as good as his players and we had some good ones over the years,” said Bailey. “And head coaches always know how valuable it is to have good assistant coaches.”

He did not coach from 1993-95 to watch his son Jared play high school baseball.

His career record was 247-89 including 44-5 in his final two seasons. His teams won or shared 10 Ohio Valley Conference championships including the first title in 1985. The Lady Dragons also won six sectionals and his teams reached the district finals on three occasions.

Bailey guided the team to three 20-win seasons including a 24-2 record in 2002 and a fifth place ranking in the coaches’ Division III state softball poll.

Beyond his players, coaches and parents, Bailey said he enjoyed his association with the other area teams and coaches.

“It was a good run and I enjoyed the battles with South Point and Chesapeake. I also enjoyed the tough competition in the Sluggerfest at Cabell Midland and Thunder in the Valley at Symmes Valley hosted by Odie Estep,” said Bailey.

“I have a lot of great memories and I do miss seeing the coaches from those years.”

And now he has one more memory he’ll get to remember each time he visit the Fairland softball field.

Reds happy with 4-3 win over Cubs

The Associated Press   CHICAGO — On a cold blustery day, Cincinnati manager Dusty Baker was happy to be able... read more