‘Worst I’ve seen in my life’ 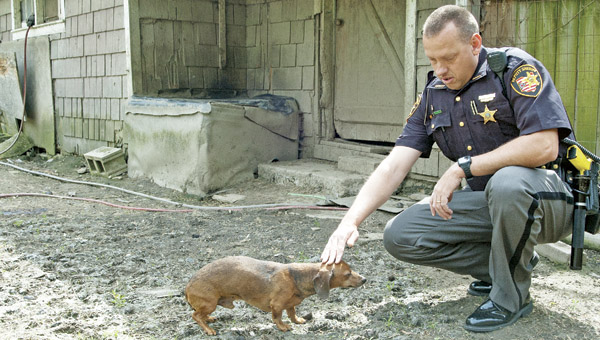 Lawrence County Sheriff’s Deputy Todd Easterling tries to befriend a dog at the home of a rural Lawrence County man who died last week. The residence was overrun with pets when deputies arrived Friday.

Sometimes, people worry when they can’t get ahold of someone. And sometimes, Easterling said, those people just wanted to be left alone.

This was not the case Friday when Easterling checked on a rural Lawrence County man, who his neighbors said hadn’t seen him in a while.

There were early signs something was wrong at the residence. The mailbox of the home on County Road 27 was full, not checked in some time.

“It was just a shock to me,” Easterling said Monday on a return visit to the home.

What he walked in on Friday was a residence overrun with dogs, inside and out.

The wooden plank floors of the home were covered in dirt, trash, feces and urine. A heavy, eye-stinging ammonia smell hung in the air. The scene was much like those of the Animal Planet television series “Confessions: Animal Hoarding.”

The owner of the property, a man in his 60s, Easterling said, was found dead in the upstairs of the house. He had been there at least a couple of weeks. So far, there has been no next of kin to notify.

Dogs inside the home were starving and turned to extreme measures for nourishment. 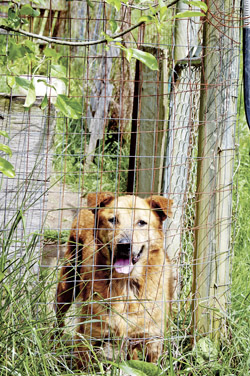 A brown dog is left in a kennel at the residence on County Road 27. Other dogs were taken or euthanized by the Lawrence County Dog Shelter over the weekend.

Outside the home, the property was littered with kennels and doghouses in an overgrown yard of weeds and grass. A separate trailer on the property housed cats, some dead and some still alive.

When Easterling saw the dire situation of the pets, he said he tried to find food. All he could find was cat food, which he distributed as he could.

Easterling estimated about 45 to 50 dogs were on the property. Some were already dead, succumbed to starvation.

Monday, there were only three dogs left on the property. A rescuer from Ashland, Ky., had heard of the situation and agreed to take the three in.

The others had been euthanized on site by deputy dog wardens, captured or escaped.

Easterling tried to gain the trust of a shivering Dachshund in an enclosure next to the house. The little dog shied away.

A Labrador-mix wagged his tail and ran along the fence line to greet Easterling.

Another dog remained in the house, too afraid to come down the stairs. There may have been others hiding.

According to County Dog Warden Bill Click, the Lawrence County Dog Shelter had been to the residence before to offer the man help with his animals. Click said the man threatened the deputies and declined their help.

Click also said they gave him some food to feed the animals.

Click said he didn’t see how one person could care for that many pets.

Deputies from the shelter collected the animals, but had to put many down at the scene, Deputy Dog Warden Ronnie Hatfield said. Some of the dogs also ran away.

“That was terrible,” Hatfield said of the situation. “I went out about 4 p.m. (Friday) and my gosh, they were trying to eat us up.”

Hatfield said there were dogs running all over the property when he got there.

Inside the house, there were several dead, Hatfield said, and the smell was overwhelming.

Hatfield said he wasn’t sure how many he and another deputy had to put down, but there were at least 10 more running at large.

“I had talked with that guy last year,” Hatfield recalled. “He was terrible to me. I told him, ‘I’ve had some complaints. I want to see your dogs.’ He wouldn’t let me see them.

“Maybe last year we could have done something, but when it’s thrown on you …”

Hatfield said he expected to get more complaint calls from neighbors in the area.

“I just hope they don’t bite anyone,” he said.

Seven dogs were taken to the shelter, but Click said he didn’t know yet if they would be adoptable.